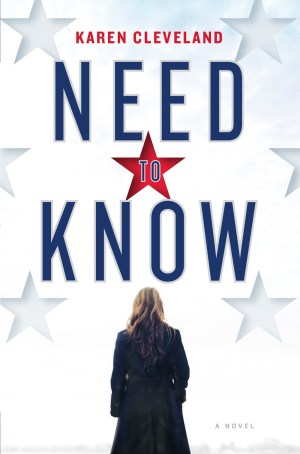 In pursuit of a Russian sleeper cell on American soil, CIA analyst Vivian Miller uncovers a dangerous secret that will threaten her job, her family — and her life. On track for a much-needed promotion, she’s developed a system for identifying Russian agents, seemingly normal people living in plain sight.

After accessing the computer of a potential Russian operative, Vivian stumbles on a secret dossier of deep-cover agents within America’s borders. A few clicks later, everything that matters to her — her job, her husband, even her four children — is threatened.‎

Vivian has vowed to defend her country against all enemies, foreign and domestic. But now she’s facing impossible choices. Torn between loyalty and betrayal, allegiance and treason, love and suspicion, who can she trust?

This novel received a lot of pre-publication buzz. Russian sleeper cells infiltrating the CIA; movie rights sold to Universal Pictures, with Charlize Theron attached; and lots of praise from other thriller and mystery authors. All of this during a political environment characterized (in part) by Robert Mueller’s ongoing investigation of Russian interference in the 2016 presidential election. So, with expectations high, I’m glad to report that Need to Know exceeded my hopes. A gripping novel that I devoured in two sittings.

Cleveland’s debut novel is very well paced. The reveals, surprises and shocks come pretty fast, while not overwhelming the reader. It doesn’t surprise me at all that it has already been option for film, as it is a very cinematic story. At the same time, Cleveland does not dispense with character development — I felt I got to know these characters well over the course of the novel, and felt invested in all of their fates. It is, however, one that’s rather difficult to review without spoiling everything.

Vivian’s despair at discovering the truth about her husband is well presented. She’s in a state of shock, and so able to continue functioning and working, but after making a split-second mistake she is also caught in an impossible situation: she has to decide if her loyalty lies with her family or with her country. Which is she willing to sacrifice? Her marriage, or national security? Do her needs and wants supersede that of her nation’s? Cleveland does a great job of building a somewhat chilling picture of Vivian’s husband’s situation and the mindset of his handlers, post-reveal (it happens very early on in the novel, so I don’t consider it a spoiler). In particular, the new reality that she is faced with regarding the safety of her children:

“They always have.” The words feel like a blow. Of course they have. Suddenly nothing seems safe. “The kids…,” I manage to choke out.

Out of the corner of my eye I see him shake his head, an adamant shake. “There’s no danger to the kids.”

“How do you know?” My voice is a whisper.

“I work for them. In their mind, the kids are…theirs.”

Over the course of the novel, Vivian comes face to face with Russian thugs, double-agents, suspicious colleagues, and has to navigate the new, confusing reality of her marriage. She questions every decision — current and past — and tries to figure out a way to save her family and not betray her country. The fact that the bombshell is dropped on the reader very early on was a great decision — it gives Vivian a long time to adjust, to question, to learn more from her husband; and in turn gives the reader a substantial story of a woman trying to handle this incredible, life-altering psychic blow. It was a nice alternative to the slow-build reveal at the end of a novel that is more common in espionage/mole thrillers. The characters are all well-drawn, three dimensional, varied and interesting to learn about. There is a good amount of tension when Vivian is at work, post-discovery. The ending was very good, and featured an excellent reveal. I don’t know if there’s going to be a sequel, but I’m definitely eager to read Cleveland’s next novel (whatever it might happen to be).

Quickly paced, gripping, and very well-written, Need to Know is a must for any thriller fan. Definitely recommended.

Need to Know is published by Ballantine Books in the US, Doubleday in Canada, and Bantam Press in the UK.

One thought on “Review: NEED TO KNOW by Karen Cleveland (Ballantine / Doubleday / Bantam)”