Let’s start with an introduction: Who is Tom Sweterlitsch?

I’m a dad, I’m a husband, I’m a science fiction writer living in Pittsburgh — that about sums me up. I’ve written two novels, Tomorrow and Tomorrow and The Gone World. I’ve also done a little bit of screenwriting, co-writing three short films with director Neill Blomkamp for Oats Studios: Rakka, Firebase and Zygote.

Your new novel, The Gone World, will be published by G.P. Putnam’s Sons in February. It looks really interesting: How would you introduce it to a potential reader?

The Gone World is a time travel thriller about an NCIS special agent fighting to prevent the end of mankind.

I was having lunch with my brother-in-law, a special agent with NCIS, when I asked him how time travel would affect his work as a federal investigator. He had this interesting answer. He said that homicides are often committed by people who knew the victims personally. Many times people close to the crime will tell investigators what happened, or the killer will confess — But sometimes, an investigation can be frustrated when the people closest to the crime simply won’t talk. He thought that maybe it could help, in those instances, if the investigator could travel far enough into the future to talk to witnesses and suspects after their relationships to one another have changed, after their emotions have cooled, and then come home to use that information in the present. I thought that was a perfect setup for a novel.

I was obsessed with Dungeons & Dragons starting in middle school. My older sister and I had the “red box” in the early ‘80s, with the set of dice that came with a white crayon because you had to color in the numbers yourself. My memories of high school are essentially my memories of the AD&D 2nd Edition campaigns my friends and I were running. As for my first genre book — It might have been the Dragonlance novel The Legend of Huma, or maybe it was a choose your own adventure called Zork: Conquest at Quendor.

I have a fun time with it, for sure — I mean, it can be stressful at times if you worry about book sales or things like that, so I try not to think about that stuff too much. The most fun I’ve had as a writer has been when I’ve attended some of the writers conferences, not so much because you meet other “writers,” but because those writers are usually great company: interesting people and passionate readers.

Every time I start a new book it feels like I’ve never written before, and I have to almost relearn how to do it. The thing that saves me is that I really find enjoyment in revising and rewriting, working through the material over many drafts, so that even if the story doesn’t flow the first time I put words on paper I know that I can find the story by working hard to get it. And my favorite part of writing is probably right at the end stages, when everything about plot and character is mostly figured out and you can really focus on the level of sentences and word choice.

I think I was maybe in 6th grade, and we had a writing assignment — to write a short story. I basically plagiarized the plot of Dragons of Autumn Twilight, the first of the Dragonlance Chronicles — but the characters were mine, and so were the words. I remember reading that story in front of my class — and I felt very confident, an unusual feeling for me growing up. I hardly ever talked in class, I wasn’t earning the best grades, but I felt right at home writing stories.

The genre right now is very strong — There has been a hard fought and greatly appreciated push to include new, diverse voices, and there are writers right now creating bodies of work that will be read for years to come. It’s definitely a good time to be reading genre fiction. Where does my work fit in? I hope it does fit in, I would love to have my books take part in the overall conversation of science fiction. I really admire writers like William Gibson, Jeff VanderMeer and China Mieville, writers creating excellent, tight novels that explore the strangest ideas imaginable.

I’m working on a new novel, and in the year ahead I’d like to write more short stories. 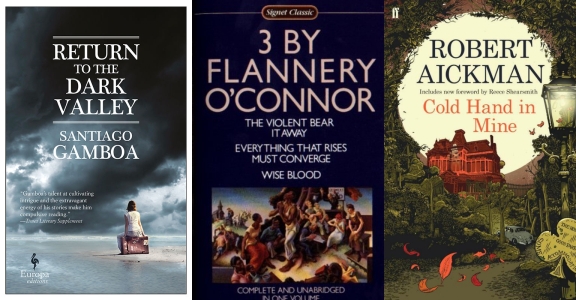 Crime and Punishment by Fyodor Dostoevsky.

This was… I must have been maybe a freshman in high school. Fifteen years old. My family was on a road trip, I was in the backseat of the car, we were driving along on the highway. A pickup truck speeds up from behind, pulls beside us, pulls ahead of us. In the back of the truck are four guys, of various ages. The truck must have been going ninety miles per hour, weaving in and out of traffic. My first thought was, if that pickup gets in a wreck or even bumps a car those guys in the back are going to die. I was looking at their faces, and realized that one of them was my true, perfect doppelgänger — I had never before, and have never since, seen someone who looked so exactly like me. It was like looking into a mirror. We made eye contact, briefly, but the pickup changed lanes, and sped away.

Definitely the publication of The Gone World, but in general I sort of live my life like I’m a guy on a raft, just seeing where the river leads me. I have no idea what’s in store for me this year: maybe something, maybe nothing!

Tom Sweterlitsch‘s The Gone World is published on February 6th by G.P. Putnam’s Sons in North America, and Headline in the UK.