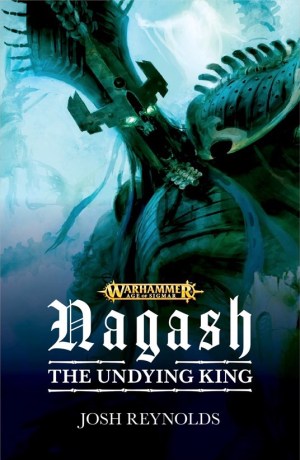 Since the dark days of the Great Awakening, the scattered remnants of humanity have clung to a bleak existence, surviving howsoever they can, no matter what the cost. Tamra, a voivode of the Rictus clans, fights one last, desperate battle for the survival of her tribe, the Drak. Now her people face their most relentless enemy ever – the lumbering minions of the Plague God. Where is their lord Nagash, the Undying King, when his people need him most? As the gods and their servants vie for power in the Mortal Realms, Tamra is drawn into a deadly game between life and death, as beings long thought gone start to exert their powers once again.

This is Reynolds’s second book to feature Nagash set in the Age of Sigmar — the lord of the undead appeared in Mortarch of Night, and the author previously wrote about the character in the first End Times novel, The Return of Nagash. Nagash has long been one of my favourite Warhammer characters, so I’ve always been interested in reading fiction with him at its centre. The Undying King did not disappoint.

Reynolds has been doing a fantastic job of fleshing out the Age of Sigmar setting. As with many people who was familiar with and fond of the original Warhammer, the re-boot was a bit jarring: everything changed. However, as I’ve read more Age of Sigmar fiction, I’m finding a lot to like. Reynolds’s shorter and long fiction has been particularly responsible for bringing me around to the new setting.

In the Age of Sigmar, Nagash has become a god — a goal he sought for millennia. Sigmar roused him from slumber, formed an alliance to turn back the tides of Chaos and to carve out space within the realms for the forces and people of order. Nagash has his own realm, Shyish. However, his elevation to godhood — not to mention a severe wound he suffered at the hands of Chaos’s champion, Archaon — has left him… broken. He has moments of lucidity and awesome power, alternated with moments of discombobulation and confusion. At one point, he says he can feels the parts of himself scattered around his realm — I wonder if this will be a plot for a future series, Nagash (or his agents) bringing him back together. That’s a little similar to the story in The Return of Nagash, but I’m sure it would be on a much larger scale.

Anyway. Back to The Undying King. The forces of Nurgle are on the move — the plague-ridden hordes have been marauding their way across Shyish, killing or converting all they find. Meanwhile, one of their daemon companions is attempting to find its way into Nagash’s inner sanctum.

I’ve enjoyed the new approach to Nurgle’s followers in Black Library fiction: there has been a greater emphasis on the trickster, good-natured and jocular aspect of the god and his followers. In less-skilled hands, this could have come across as silly, but Reynolds does a great job balancing the horror (and grossness) of Nurgle with the faux-chivalric mannerisms of his plague knight characters. A few chuckles were elicited. This aspect of the rotbringers et al offers a nice juxtaposition to their undead opponents: quiet, relentless, just creepy. The final confrontation between the forces of Chaos and undead is pretty epic, but at the same time Reynolds doesn’t lose sight of the more personal stories he’s seeded over the course of the novel.

The story is mainly told from the perspective of a voivode of the Rictus clan (residents of Nagash’s Shyish realm), the mortarchs Arkhan the Black and Neferata, and Nagash himself. All offer very different perspectives on the events and characters with whom they interact. The lack of reverence the mortarchs feel for Nagash is interesting — they seem to despise their lord, but at the same time recognize that they would be nothing without him. Reynolds includes some interesting observations about Arkhan’s nature and Neferata’s scheming. I’m hopeful that these will be developed in future novels. (For example, in David Annandale’s upcoming Neferata series — you can see the cover art for book one, here.)

A quickly paced novel, The Undying King does a great job of introducing readers to the cold realm of Shyish, and reacquainting us with some of Warhammer’s best undead characters — Nagash himself, Neferata and Arkhan. The battle sequences are well-written and restrained, the humour light and well-deployed.

Nagash: The Undying King is published by Black Library, and is available now as an eBook, and is due out in hardback and audio in March.

Also on CR: Interview with Joshua Reynolds (2017); Reviews of The Return of Nagash and The Lord of the End Times