Skip to content
HomeReview: THE LORD OF THE END TIMES by Joshua Reynolds (Black Library) 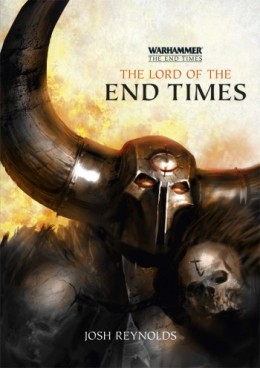 The End Times have come. Archaon Everchosen marches on the city of Middenheim, and if he captures it, the key to the Chaos gods’ ultimate victory will be his. The last heroes of men, elves and dwarfs gather to stop him, but to stand against the hordes of the Ruinous Powers, they must turn to darker allies. Against all reason, the last hope for the world may be the Undying King, Nagash himself – if he and the mortal races can find common cause and work together. If they cannot, Archaon’s plan will come to fruition and the world will be consumed by Chaos.

It’s been a fun and interesting few weeks, getting caught up with Black Library’s End Times series. After decades of interest in Warhammer (though, I must admit that I never played a proper game), and especially the novels, finishing this novel was something of a bittersweet moment. Reynolds does a great job of bringing the various threads together, and dishing out plentiful death and destruction. Not only that, he does it with some tongue-in-cheek humour, and an awareness of how big, bold and brash (and just a little over-the-top) this story has become and needs to be at its conclusion. I enjoyed this a lot.

So how does one review book five in a limited series? Certainly, with some difficulty. (Spoiler potential all over the shop…) It’s especially difficult with a series that ties in with a table-top game system with a considerable body of non-novel content all its own: Games Workshop released five End Times background books at the same time as the novels. They seem to have been written at the same time, too, so there are some minor inconsistencies, and also plenty of events and information not included in the novels. The story between the five novels jumps forward each time, skipping over some key events. I tried to keep up with the background books, but they were… not particularly engaging reads. So, I skipped over a fair bit. I was still able to follow the events of the End Times, though, and only a couple of times felt like I’d missed something.

Anyway, back to The Lord of the End Times. The story herein is huge. It’s big, insane, explosive, battle- and death-filled. Heroes that Warhammer fans have been familiar with for decades meet their ends (not always noble, often sad). It’s well-written and moves quickly. I enjoyed the side- and new characters, and how they were brought into the story — attempting to steer events, but really (as with everyone else) just being dragged along by the tide of chaos. Reynolds includes a good number of classic and newer heroes, some of which he’s written before. Archaon, the Big Bad, was also well-written, and I much preferred him here than in Rob Sanders’s Archaon: Everchosen. The only character that felt a little off (and I mean a little) was Teclis, who is really not doing well, but nevertheless didn’t feel as convincing or interesting as he did in Gav Thorpe’s End Times novel, The Curse of Khaine.

Speaking of the characters, another thing I really appreciated was that Reynolds didn’t sanitize the “heroes” arrayed against Archaon and the forces of Chaos. Malekith, for example, is… well, a dick. After thousands of years of waging brutal and demented war against the High Elves (and pretty much everyone else), Malekith remains quite the bastard and unpleasant character. Despite being the new king of all elves, avatar of shadow magic, and so forth. The other elves remain haughty and look down on humans and barely tolerate the presence of dwarfs. At the same time, one of the more noble (and, early on, most amusing) characters ended up as Archaon’s executioner. Actually, Vlad von Carstein was also quite noble, as it turned out. So yes, Reynolds does a great job of keeping the various characters in character.

Well-written, The Lord of the End Times includes enough information and background that I don’t think it’s necessary to read the background books. Certainly, I would recommend reading the other End Times novels (even if just the five main, and not the ends to other series) — if for no other reason than they’re great, fun fantasy novels. It felt that Reynolds took a lighter approach to writing this than some might have expected — the humour is light when used, and very good, but never overshadows the import of events. The novel is stuffed with great scenes and characters.

Very much recommended, this is an explosive end to the Warhammer World.

4 thoughts on “Review: THE LORD OF THE END TIMES by Joshua Reynolds (Black Library)”