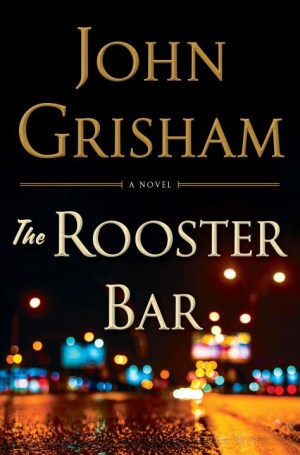 Grisham had an issue or two he wanted to talk about

Mark, Todd, and Zola came to law school to change the world, to make it a better place. But now, as third-year students, these close friends realize they have been duped. They all borrowed heavily to attend a third-tier, for-profit law school so mediocre that its graduates rarely pass the bar exam, let alone get good jobs. And when they learn that their school is one of a chain owned by a shady New York hedge-fund operator who also happens to own a bank specializing in student loans, the three know they have been caught up in The Great Law School Scam.

But maybe there’s a way out. Maybe there’s a way to escape their crushing debt, expose the bank and the scam, and make a few bucks in the process. But to do so, they would first have to quit school. And leaving law school a few short months before graduation would be completely crazy, right?

As long-time readers of Civilian Reader will know, Grisham is one of my favourite authors — even though I think he’s quite inconsistent. Some of his novels have been excellent, while others feel either rushed or bloodless. I enjoyed Camino Island, a fun and quickly-paced caper-type novel. In The Rooster Bar he returns to the genre that has made him a global bestseller: a legal thriller. Unfortunately, I didn’t enjoy this as much as I’d hoped.

Reading The Rooster Bar, it very much felt like Grisham wanted to discuss a couple of contemporaneous issues. This is no bad thing, and quite often the impetus behind fiction. However, in this book, the story seemed to be there only so he could discuss this issue — specifically, the “student loan scam”. This is not to say that he hasn’t picked up on an important issue: the way certain student loans in the United States (and other countries, but mainly the US) are administered, doled out, and collected is an incredibly important problem that faces not only the students but also the US government. (And this was written before the changes that will arise during Trump’s presidency.) But the only times the writing engaged was when he was talking about the specifics — at other times, he felt like he was going through the motions.

The characters weren’t too interesting. Bits of story are plonked onto the reader early on, only to disappear until later in the story — picked up as if he thought, “Oh, wait, I need to wrap up that bit of the tale.” They swing between lazy, naive and oddly proactive. They have been dealt a terrible hand, sure, and Grisham uses them quite well to point out some staggering issues with high-capacity, fast-paced law courts. Instead of being sympathetic, though, they come across as arrogant — which is saying something, because they are in a terrible position. After they create a bogus law firm — which, when you think about it, is possibly the most reckless, least sympathetic thing for them to do — they hustle, hustle, hustle. Later, they have a sudden burst of conscience, which didn’t feel well established or particularly in character.

If you are interested in reading about the student loan scandals in the United States, I’d recommend looking for some long-form journalism on the subject. You’ll probably get more out of non-fiction pieces than you will out of The Rooster Bar. This novel is a disappointing (and unexpected) miss, in my opinion.

The Rooster Bar is published in North America by Doubleday, and in the UK by Hodder.