Possibly the best thriller (or novel) of the year?

Everyone can be bought. At the right price…

Detective sergeant Denny Malone leads an elite unit to fight gangs, drugs and guns in New York. For eighteen years he’s been on the front lines, doing whatever it takes to survive in a city built by ambition and corruption, where no one is clean.

What only a few know is that Denny Malone himself is dirty: he and his partners have stolen millions of dollars in drugs and cash. Now he’s caught in a trap and being squeezed by the Feds, and he must walk a thin line of betrayal, while the city teeters on the brink of a racial conflagration that could destroy them all.

Don Winslow’s latest novel is a haunting story of greed and violence, inequality and race, and a searing portrait of a city on the edge of an abyss. Full of shocking twists, this is a morally complex and riveting dissection of the controversial issues confronting society today.

The Force is the first of Winslow’s novels that I’ve read. It will definitely not be the last. There was a lot of pre-publication buzz surrounding this novel, and I can certainly now see why: it’s superb. On almost every level, this novel is a triumph.

It is tempting to wax rhapsodic, at length about this novel. I will, however, restrain myself. It’s gritty, it’s brutally honest (even when that’s uncomfortable), it’s epic in scope, and it’s utterly gripping. I ended up reading the final third of the novel well into the wee hours of the morning, needing to find out what happens. I was genuinely hooked. Winslow’s prose is excellent, and the story is gripping throughout. Winslow doesn’t shy away from uncomfortable topics, and does a great job of presenting multiple sides of an argument (the sane ones, anyway). The issues of cop-shootings, racism (institutional and general), city corruption and politics… Everything is laid bare in all its ‘glory’. 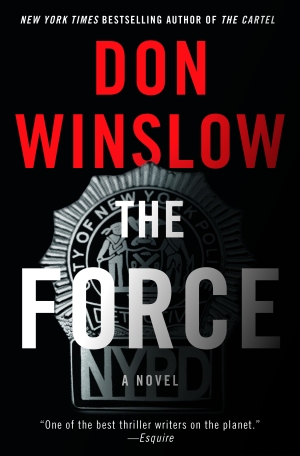 Each character in the novel is flawed, often deeply. There are no paragons of virtue. Even the ‘heroes’ commit some heinous acts. This will make some readers uncomfortable, of course, but the fact that the entire novel exists in the various shades of grey is one of its strengths. I suppose good parallels could be found in The Sopranos and The Shield TV shows. The good do good, but they have no qualms over taking shortcuts to do the best for the city, the Force, and/or themselves. One theme of the novel is how corruption can be gradual, and that sometimes it can be borne of the best intentions. It is also about brotherhood and tribalism. The fierce bond between members of the titular Force, as well as the larger NYPD; but also the bonds among the gang bangers; the unexpected bonds between cops and their CIs; and between cops and their oft-neglected families.

New York is brilliantly, grubbily portrayed in the novel. From the projects in Harlem, to the halls of justice, to the glittering penthouses — everywhere is presented as having a patina of corruption and moral rot. Sometimes, this rot is the result of long-time persecution, neglect or despair. Other times, it’s the result of greed and unchecked (or highly privileged) ambition. But, at the same time, each has moments of light and hope. Or decency, when a wayward inhabitant is presented with a better option. The side-characters throughout are pulled from all over the New York spectrum, salubrious and not (and many areas across both). They are excellently drawn characters, and all are realistic (and, if you’ve spent much time in New York, often familiar).

The ending is possibly the most epic I’ve ever read in a thriller. Perfectly executed, absolutely gripping. If you read only one crime novel this year, make it The Force.

Very highly recommended, The Force is a must read.

Don Winslow’s The Force is out now, published by Harper Collins in the UK, and William Morrow in North America.