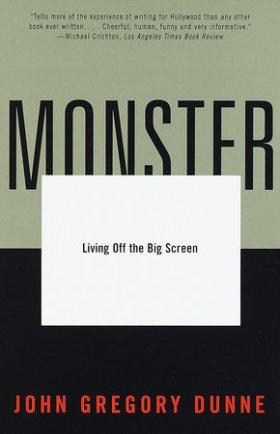 An entertaining, engaging memoir of screenwriting

In Hollywood, screenwriters are a curse to be borne, and beating up on them is an industry blood sport. But in this ferociously funny and accurate account of life on the Hollywood food chain, it’s a screenwriter who gets the last murderous laugh. That may be because the writer is John Gregory Dunne, who has written screenplays, along with novels and non-fiction, for thirty years. In 1988 Dunne and his wife, Joan Didion, were asked to write a screenplay about the dark and complicated life of the late TV anchorwoman Jessica Savitch. Eight years and twenty-seven drafts later, this script was made into the fairy tale “Up Close and Personal” starring Robert Redford and Michelle Pfeiffer. Detailing the meetings, rewrites, fights, firings, and distractions attendant to the making of a single picture, Monster illuminates the process with sagacity and raucous wit.

I picked up both of Dunne’s Hollywood-related book (the other is The Studio), earlier this year. I decided to read them in chronological order, and I’m glad that I did. The Studio is an account of Dunne’s year (1967) shadowing Richard Zanuck, an executive at Twentieth Century Fox. Dunne was introduced to the inner-workings of a major studio and the production process of a big-budget, hyped movie (mainly Dr. Doolittle, but others feature). It was a good book, but not the most exciting. It helped that I’d seen many of the movies mentioned. Given recent changes in how Hollywood operates, though, much of the information and many of the observations were now more of nostalgic interest as opposed to practical.

His second Hollywood book, Monster is a different creature entirely. Here, Dunne uses his and Didion’s work on the screenplay for Up Close & Personal as a frame through which he examines the writing and writers’ side of Hollywood. He looks at where writers fall on the pecking order, the dismissive attitude many in the industry have for them, and how insane are certain industry idiosyncrasies.

For that latter, consider this: for a movie that was never made, a studio ended up paying multiple writers and scripts doctors, collective, three million dollars.

I enjoyed seeing the way the industry works from Dunne’s perspective. It made Monster a great companion book to Lynda Obst’s Sleepless in Hollywood, which I reviewed a couple of days ago. Dunne is pretty detailed with his account of writing fresh scripts as well as serving as a doctor on others’ movies. His and Didion’s frustrations with the industry are clear throughout — unsurprisingly, given who they were working with (e.g. Don Simpson), and the frankly idiotic and inconsiderate behaviour of others (e.g., being called to a meeting in LA, but the other party not showing up, and instead going to New York, without telling you).

Of course, Dunne and Didion’s experiences during this period were particularly frustrating, which certainly coloured the author’s impression of the industry. However, from other accounts (including Dunne’s The Studio), this does not seem to be an exceptional case. What does seem exceptional, however, is Dunne’s ability to just not take any of other people’s bullshit. They are clear with their opposites when they think they’re being jerked around, and implacable in their positions. It was refreshing to hear of one of their wins against a studio that was trying to screw the authors out of their contractually-owed payment. They fought, they won. They faxed, “You lost” to the studio. Pretty ballsy. And satisfying.

If you have any interest in learning more about the movie industry, and particularly the writers’ side of things, then Monster is a must read. Briskly paced, very well written, and interesting throughout. Very highly recommended.

John Gregory Dunne‘s Monster is published by Vintage, and is available in the UK as well.