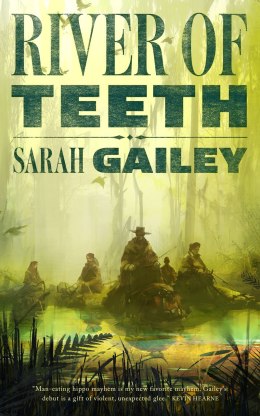 An classic-style Western. Only, with killer hippos…

In the early 20th Century, the United States government concocted a plan to import hippopotamuses into the marshlands of Louisiana to be bred and slaughtered as an alternative meat source. This is true.

Other true things about hippos: they are savage, they are fast, and their jaws can snap a man in two.

This was a terrible plan.

River of Teeth has a fantastic premise: what if hippos were imported into the United States, to make up for the decline in buffalo stocks? This was a real proposal, way back when, and Gailey has done a great job of imaging an America in which hippos have spread and thrived — some are used as mounts, and there are thousands of deadly “ferals” populating the waterways. Now, throw in a group of mercenaries, drawn together on an operation (not a caper), and you have all the ingredients for a fun, original adventure.

Gailey’s characters are all interesting and varied. They bring different things to the story, as well as different skills to the operation. Each is loyal to their comrades, as well as to their hippos. Each has an air of mystery about their pasts, shared or otherwise. Their relationships are interesting and realistic — they bicker, a couple fall for each other, they obscure truths, they fight together, they discuss hippos, there are some casualties along the way. There may also be some betrayal thrown in for good measure…

The story moves at a good clip, never getting bogged down in too much exposition, while also managing to paint a full picture for the reader. Gailey doesn’t hold her readers’ hands through the story and world, leaving most of the small details to us. Instead, she gives us plenty of broad strokes and situational details, which kept the pace moving very nicely. There are occasional dips in momentum, for example between gathering the team and executing their plans. There were a couple of transitions that weren’t quite as smooth as they could have been, but they hardly mattered to the overall story. The use of “they” as a gender-neutral pronoun for one character sometimes came across as clunky or confusing, especially when the character in question was involved in a conversation or a group activity. A minor issue, but it came up not infrequently. Using the character’s name more often would likely have avoided this confusion (as Gailey does for most of the other characters).

Gailey’s writing is very good, with plenty of flair and good turns of phrase, while never being florid or over-done. The story builds nicely to an ending that is explosive, somewhat moving, and maybe also offers up the potential for a sequel. I’d certainly be back for more in this setting.

Overall, I’d recommend this: it was entertaining, interesting, and well-constructed. It’s a great introduction to Gailey’s writing, and I’m sure it will make most readers interested in reading more of her work.

Sarah Gailey‘s River of Teeth is due to be published by Tor.com in May 2017, and will be available in the UK.

2 thoughts on “Review: RIVER OF TEETH by Sarah Gailey (Tor.com)”