Let’s start with an introduction: Who is K.M. McKinley?

You can call me Kay. I’m a writer. There, I said it. I have been for several years now. Before that I worked as a journalist and editor for fourteen years or so. I live in Yorkshire, in the UK. The Iron Ship book bio is out of date, as I wrote it before moving back to where I grew up.

Your new novel, The City of Ice, will be published by Solaris this month. It looks rather good: How would you introduce it to a potential reader?

It’s an epic, multiple point of view fantasy set in a world undergoing an industrial revolution fuelled by the science of magic. Six siblings make their way through a society undergoing massive upheaval, while a terrible threat from ancient days makes itself known. The world is lovingly crafted, and hides deep mysteries. I’d recommend it.

What can fans of the first book in the series, The Iron Ship, expect from this sequel?

The iron ship gets where it is going, with adventure on the way. We get to meet a whole lot of new characters, including a stay with one of the last gods, and some members of the cast who had brief roles to play last time around have major parts now. A lot happens in this book. The first was a lot of set up, this one is packed full of incident, and I begin to reveal the mysteries behind this world. It’s pretty exciting stuff. We’ve dragons, new monsters, weird technology, the return of this world’s ancient race, duels, politics, terrorism, exploration, magical battles and all kinds of stuff. It’s pretty darn exciting, if I do say so myself. 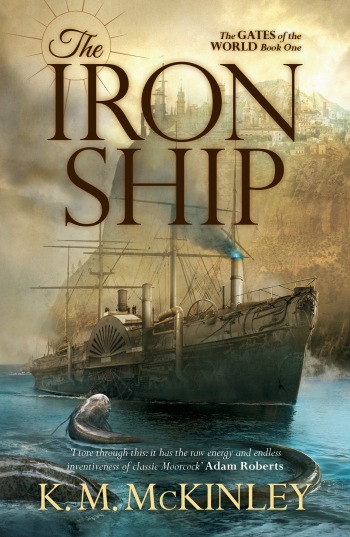 What inspired you to write the novel and series?

It was a lot things really. I love world building, and wanted to create a slightly different sort of fantasy world. I read Michael Swanwick’s The Iron Dragon’s Daughter, and loved it. I wanted to do something similar, but less allegorical, more in the mode of epic fantasy. Since I had the idea fantasy with industrial trappings has become more popular, but it’s still not the norm.

Another thing was that I wanted to explore the role of women in fantasy. I read a lot of fantasy in the 90s. Now, I don’t think this still applies so much any more, as fantasy has become harder edged, but back then I got sick of fantasy worlds with off-the-peg patriarchal medieval societies whose women can, often inexplicably, do the hell what they like. It annoyed me. It never seemed very realistic. Real non-liberal societies can be intensely restrictive to everyone, but especially women. I mean, by all means, do a story set in a world where women are in charge, or completely equal, or apportioned certain roles they don’t traditionally have in ours. That’s a whole bunch of great storytelling possibilities right there. What irritates me was there was often this disconnect between the wandering princess and the world she lives in. It just seemed a bit lazy and unimaginative.

I wanted to write a story that was, in part, concerned with female agency against the odds. Where you have patriarchy, women still can and do have the power to effect change. So though many of the societies (but by no means all) I depict in this series are male dominated, in The City of Ice we have a powerful woman mage, a female soldier, a glimpse of Ruthnia’s sole matriarchal society, the Hundred’s best duellist (who is a woman. Not the best female duellist, but the best duellist, full stop) and an ex-prostitute who finds herself caught up in something quite dark involving one of the Hundred’s two remaining gods.

Stuff I read. Other peoples’ novels. History. The news. All over the place. It’s a funny question I used to ask myself. For me, there is no real answer to it.

My mum and dad. My mum bought me the Hobbit when I was seven, my dad read it to me and then I read it myself. I moved on to my mum’s small but quality library of SF books thereafter.

I haven’t really done anything else. When I was young (my god, so young now when I look back) I was a teacher of English abroad for 18 months. That aside, all my working life I have been a writer. I love it. Writing novels is more my thing than journalism. I have a marvelous work life balance, which I always wanted, and a very short commute down the stairs to my office. I get to spend a lot of time with my son which so few parents can do. Sometimes it’s a pain. Right now I’m working till midnight every day, but then I might suddenly have a month off. I’d rather have that than the 9-5 (and that’s more like 7.30am-10.pm in this always on world of ours).

Nah. I interviewed loads of writers back in the days of yore. In my search for writing “secrets” (psst, they aren’t what you think they are, but they do exist — they are accept criticism, work hard, write often, and don’t be an arse)  and they all worked differently. I write a lot. I mean, a real lot. When I tell my writery colleagues they go “Really? How?” This year I’ve done 500,000 words plus of fiction. Well below Robert Silverberg’s height (I like that man’s books) of a million words a year, but more than most.

I say paying my mortgage it the finest tonic for writer’s block a person can have. I like to eat! Survival is such a spur to creativity. To keep the task fresh, I change how I write a lot. That’s the only constant. I do a ton of research on Wikipedia, to whom I pay a very grateful, if small, amount of money monthly.

When did you realize you wanted to be an author…?

When I was about 16. I thought sitting around in a leather armchair with a dog at my feet and a glass of brandy in my hand beat getting a real job.

… And what was your first foray into writing?

They say writers write. I have done for years. I have plenty of horribly, abortive pieces of fiction hidden in a locked foolscap folder. My first published, professional piece was a review of a radio play for SFX magazine.

Do you still look back on it fondly?

Nope. I was too hard on the guy.

Oh man, what a loaded question. I think we’re perhaps a little too focused on inclusivity over telling honest stories, if you see what I mean? I’m no rabid puppy here, but last year I read three novels, one after the other, written by white people, whose protagonists were black lesbians. That’s cool, and one of them was an excellent book. You know, the world is so canted toward established elites it’s natural for folk to want to redress the balance, but I do think we have a tendency to get a bit fixated on culture politics in the genre and in some ways it makes the problems worse. Like, Donald Trump worse. Sadly, I think liberal culture has become weirdly intolerant in its quest for tolerance, and blind to its own failings. As geek culture is a part of that, we suffer too. It makes me sad.

If we all just tried to be who we are and respected each other for it, we’d reach a natural equilibrium far more quickly. That’s kind of happening anyway, I think. SF and fantasy is broadening its appeal year after year. In the West, we’re hearing so many more unforced voices from further afield that we perhaps ignored before. Over the last year I’ve read stories from Africa, Latin America, Russia and China. Good writing gets me, wherever it is from or whoever it is by. The oldest story in the world can be amazing all over again when retold well. I like a diversity of opinion. I enjoy stories by left wing writers and right wing writers and people who can cleverly use all points in between in their work. No human being has all the answers. That way lies fanaticism.

What I don’t like is bad writing, clichéd stories about princesses who think they are so ugly when really they are drop dead gorgeous, or lazy world building, especially ones fixated on complicated magical systems to the expense of all else. I like a bit of grimdark, if the grimdark is the flavour, and not the point of the story. Naturally, I level all these criticisms at my own work and feel dead inside as I see them in every word I write (apart from the princess part, you’d never catch me doing that).

As to my work, I’m just glad that it fits in at all. I am humbled that people buy it. When they like it, I get all giddy and feel weird. I jokingly say writers are cowardly show offs, only I’m not joking so much. We need validation, and we’re all scared we’re rubbish. I suppose I get imposter syndrome. On the one hand, that is massively self indulgent, a form of ugly egotism all itself, on the other, it stops me from being unbearably pleased with my life in a more direct way. I have a good life. I thank everyone who has ever bought my books for it.

Next up under my name is The Brass God, part three of the series. I’m finishing off something else at the moment.

Ooh, bits of everything. Non-fiction I’m rereading In Defence of Dogs by John Bradshaw, because I just got a new puppy. 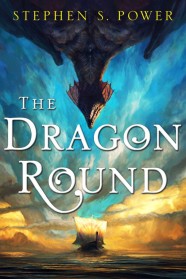 Wowsers. Fantasy? There are so many I love! The Iron Dragon’s Daughter, I’d say. Or William Hope Hodgson’s The Night Lands. Last year’s favourite was The Dragon Round by Stephen S. Power. Now that was good fantasy. I love Ursula Le Guin. She is straight up the world’s wisest writer. We should elect her Honorary World Grandma.

There’s some sexual content in The City of Ice that may prove controversial, but I’m not just making it up… (Goes pink.)

Hahahahahaha! The continuation of the human race in the face of 2016’s best efforts to set us up for World War III!

The Iron Ship and The City of Ice are published by Solaris Books.

4 thoughts on “Interview with K.M. McKINLEY”