Let’s start with an introduction: Who is Brent Weeks?

One who obeys instructions poorly.

Your latest novel, The Blood Mirror, was recently published by Orbit. It is the fourth novel in your highly-praised Lightbringer series. How would you introduce the series to a potential reader?

The Lightbringer Series is an epic fantasy set in an alternate Mediterranean Sea basin area circa 1600. So it has magic, rudimentary firearms, and swords all together. It’s a story full of fast action, betrayal, and big reveals, focusing on a destitute supposed orphan and his charismatic and powerful father who is basically the emperor of the world, and how their meeting will bring an end to everything either of them has ever known.

What can fans of the series expect from this fourth novel? Are there more books to come?

The Blood Mirror is Book 4 of 5 in the Lightbringer Series. In this book, a number of characters really come into their own, becoming who we hoped they’d be, or who we feared they might choose to be. Fans can expect some fun twists, some shocking reveals, and some great battle scenes that prep the stage for a final cataclysmic showdown in the last book.

What inspired you to write the series? And where do you draw your inspiration from in general?

I take my inspiration for much of my writing from the same great font that many writers through the ages have taken: that is, the need for food and shelter. Seriously, though, writing is just what I do. It is passion and purpose and paycheck all together. Coming up with ideas, filtering them, screening out the ones that are bad or simply don’t fit me as a writer, gleaning new ideas from everything I read and extraordinary people I meet, or beautiful or ugly life moments I experience – that’s just what I do. That’s simply my shape as a human being. I don’t want to make it sound mystical, but the question tends to flabbergast writers who have come up with hundreds of ways to counter the question, but I think tend to experience life as I do: we ask not “Where do you get your ideas?” but “How could you experience life and not want to make art in response?”

I had wonderful formative experiences with Edgar Allan Poe, so I was never under the delusion that writing fiction worth reading meant only writing real stuff. Then early on, I discovered Tolkien, Edgar Rice Burroughs, and a little later, Zelazny. But Tolkien was the well I returned to time and time again.

I love it. It’s what I was made to do. But there are also certainly quirks and hard things.

I do, but I feel these are so idiosyncratic to each writer, that what works for me may be the opposite of what works for someone else. One thing I’ve really enjoyed, however, that perhaps many people could benefit from, is getting a walking desk. Basically, you strap your keyboard to a treadmill and keep the blood flowing. I think writers have been walkers quite often over the centuries.

When I was 13, I started my first epic fantasy novel. I remember sitting in my parent’s basement with a first generation Macintosh Laptop cooking my legs, and writing 20 pages in a day. I think I knew as early as that that this was what I wanted to do. Later, I convinced myself that was completely impractical and nobody could actually do that for a job. Luckily, it looks like my impractical side has won out!

I don’t feel that I read anything close to the critical mass necessary of my colleagues’ work to make any sort of global judgments on the genre. I’m not even sure it is one genre any more. Therefore, I think any comparative statement I could make is pretty worthless. What I strive to do is to write outstanding fantasy novels that are fun and surprising and reveal new layers upon re-reads. Dante liked to say that he wrote on four levels at the same time: the literal, the allegorical, the moral, the anagogical. Now I’m not sure I hit all four levels at once, all the time, or maybe even most of the time, but on layers I’m somewhere between Dante and Shrek.

I just finished up a book called Grit: The Power of Passion and Perseverance, which I enjoyed quite a lot. I’m always reading non-fiction books, both for my own edification and to better understand the psychology of high achievers – because those are the kind of people that I tend to write about. And I just started a book called Triggers, also non-fiction, by Marshall Goldsmith, which is not as good, but still has some noteworthy points about how we are shaped by our environment – you are a different person while in a tense traffic situation than you are perhaps at home. And a different one still out at the pub with your friends. Next on tap I have an adaptation of Gilgamesh, which somehow I’ve gone all these years without ever having read.

It depends on the situation we’re talking about. If I were to recommend one novel to somebody who was like, “Hey Brent, can you recommend a novel to me?” and they had the cacophony of our current media landscape on offer, I would probably suggest the most recent fun thing I’d read. Like the graphic novel Lone Wolf and Cub, which I just devoured recently. But if they were going to be stuck on a desert island somewhere, and they only had one novel, that they were then going to have to read and re-read hundreds of times because they had no other media, I’d probably suggest something like the Brothers Karamazov… which, at least for me, is the polar opposite of fun, and yet totally worthwhile. I mean, you could spend months with the Grand Inquisitor chapter alone. 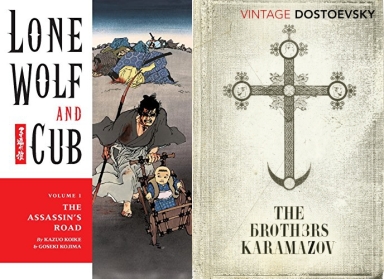 I most look forward to escaping the tyranny of the urgent. I look forward to having a little more time to read books for fun, to spend more time with my wife and daughters, and then working with renewed spirits. When you’re under a really tough deadline, which I was with the last book, you can get overtired, and things that you enjoy you don’t enjoy as much anymore. So already, one month now after my book release, I’m excited about writing Book 5. And that is an awesome feeling.

The Blood Mirror is out now, published by Orbit Books in the UK and North America. The first three books in the Lightbringer series are, of course, also available.