Let’s start with an introduction: Who is J.D. Oswald?

Most of the time I am James Oswald, livestock farmer by day and author by night. The D stands for Douglas, in case anyone was interested. I decided to use a slightly different name for The Ballad of Sir Benfro to distance the series from my Inspector McLean series of Edinburgh-based detective novels. I’ve been writing stories for as long as I can remember, and had a Tharg’s Future Shock published by 2000AD back in 1993. Success as an author has been a long time coming though. My first Inspector McLean novel, Natural Causes, was only published in 2013, and the first of the Ballad of Sir Benfro series, Dreamwalker, came out in late 2014. It really does take twenty years to become an overnight success.

Your new novel The Obsidian Throne is published this month by Penguin. It’s the final part of your fantasy series, and looks rather interesting. What can fans of the series expect from the finale, and how would you introduce the series to a potential new reader?

I hope readers can expect a satisfying conclusion to a very long story, although I am preparing myself for some angry tweets and emails when people see what has happened to their favourite characters. For those new to the series, it is a tale of a young dragon and a young boy, thrown together by fate and struggling to overcome the forces of evil bent on destroying their world.

My take on dragons is perhaps a little unusual. They are sentient, wise and deeply magical creatures who at the start of the tale have been hunted almost to extinction. They cannot fly, do not breathe fire, and are really rather pathetic, timid beasts, hiding out in the more remote parts the land and consoling themselves with legends of a time when they were much more like the dragons of popular mythology. The series is in many ways about uncovering the reasons behind the diminishing of dragonkind and a search for a way to undo whatever curse has been put upon them to make them so. 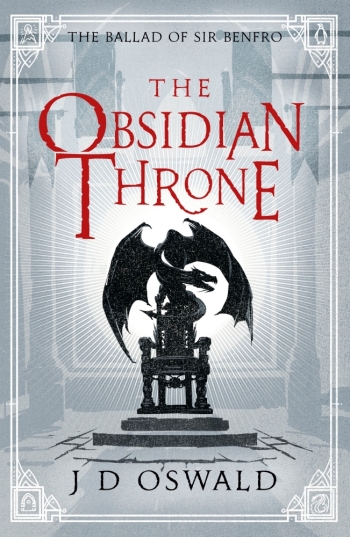 The original idea came from a chance observation by my partner, Barbara, that Sîr Benfro, the Welsh for the county of Pembrokeshire, would make a great name for a dragon. We had both recently moved to mid-Wales and were learning the language at evening classes. Our work was on a livestock research farm in the heart of the Cambrian Mountains, and the landscape, language and myths of the country were my inspiration then. Even now, I draw my inspiration from places, their history and the stories of the people who have lived there.

I am lucky in that I grew up in a house full of books, and was raised by parents who encouraged me to read whatever I wanted (or perhaps were happy that I was hidden away with my nose in a book and not getting into fights with my brothers or otherwise causing mayhem). I discovered comics at an early age – first reading The Trigan Empire in Look and Learn when I was four or five, then moving on to 2000AD and finally discovering the wonders of US comics in the early 80s. Around the same time, I started to read a lot of Science Fiction – E.E. ‘Doc’ Smith, Robert Heinlein, Philip K. Dick and more. I fortuitously picked up a copy of The Colour of Magic around the time it was first published, and that was probably my first foray into fantasy after the obligatory reading of The Hobbit and The Lord of the Rings as a teenager. I don’t think I was ever introduced to genre fiction, so much as stumbled into reading it and never looked back.

I always dreamed of making enough money from writing to be able to go to my boss and tell him to stick his job where the sun doesn’t shine. Alas, by the time success came along I was my own boss, running the family farm in North East Fife – a job I wouldn’t really want to give up anyway. I’ve been writing since before I can remember, and first started submitting stories for publication over twenty-five years ago, so finally making it to being a published author is wonderful. The discipline of writing to deadlines and under contract is something that takes a bit of getting used to, but in many ways it helps – see my answer to the next question for more.

I am perhaps the most disorganized person you can imagine, and remain convinced that I only manage to produce books by cheer chance. My approach to writing a novel is best described as haphazard, particularly for the Inspector McLean books. I can get away with this as I have a well established cast of characters I can throw a baffling crime at and then see what happens. My first drafts tend to be me telling the story to myself.

A certain amount of planning is required to make close on a million words of story hang together, so for the Benfro series I built myself a database of names, places and artefacts, and drew a very rough map. Beyond that, I very much make it up as I go along.

The first book in the series, Dreamwalker, was actually the second book I wrote. The Rose Cord came first, but by the time I’d finished it I realised I’d started too late. I set about writing a prologue to flesh out the history of the main characters, and 150,000 words later I had an entirely new book. At the beginning of the process I had thought the series would be a trilogy, but it has ended at five episodes. I could very easily have made it six.

I first made the conscious decision to try and earn a living from writing in about 1992. Two great comics writers – Grant Morrison and Mark Millar – came to Aberdeen, where I lived at the time, and gave a talk in the Central Library. I had recently graduated from Aberdeen University, was working part time in an off-licence and had no real idea what I wanted to do as a career. Mark Millar explained how he had first sold a script to 2000AD, and I thought I could do that. It took me about a year to get my first script bought and published, but then the work dried up. I carried on writing, supported by a long succession of dead-end jobs, for the thick end of twenty years before finally getting a breakthrough with my first two Inspector McLean novels.

I still love comics, and read them regularly (even 2000AD, which is celebrating its 40th anniversary next year). I would dearly love to write some more scripts, but finding the time is always the problem.

Fantasy as a genre is in robust and rude health, I think. The success of the Lord of the Rings and Hobbit movies, and now Game of Thrones on the television has brought the genre out of its geeky cupboard and almost into the mainstream. There are so many fantastic authors writing amazing fantasy books these days, and covering such a wide gamut of different subjects and styles that it’s difficult to think of it as just one ‘genre’ any more. I’ve never been a big fan of the term, either. For me there are books, some good, some bad, some indifferent. Their subject matter is unimportant as long as their story is engaging.

I’ve just delivered the seventh Inspector McLean novel – Written in Bones – for publication next February. I’ll be writing another one of those soon, but before then I’ve a couple of half-finished projects I’m trying to whip into shape. One is the first of an open-ended series that while technically science fiction has as much of the epic fantasy about it as anything else. I’m also working on a ghost story set in contemporary Wales, based on my experiences while living there – something I had to wait until I had moved away before I could really start writing as a lot of my Welsh friends might see themselves in the characters.

Running a livestock farm and writing two novels a year leaves little time for anything else, which means my to be read pile is more of a to be read room these days.

Only one? That’s harsh! But if I must, then Assassin’s Apprentice, by Robin Hobb. This is the first of the Farseer books and is just so beautifully written and brilliantly realised that I would recommend it even to those who sneer that fantasy is only for kids. Robin Hobb has been a huge influence on my own writing.

I don’t know. I expect I’d be surprised that they found something about me surprising. I went to school with Joss Whedon, which some people might find hard to believe. I don’t remember him though, and I’d be very surprised if he remembered me. He’s a bit older than me, for one thing, and I was the geeky kid with unfashionable spectacles who turned up at the start of his first term at a new school with his leg in full plaster after falling off a cliff in the holidays.

Genuinely nothing springs to mind. I find it hard to remember what day today is, let alone think any further ahead than the end of the week. Writing is a slow process, publishing slower still. Farming is much the same year by year, and livestock don’t really understand the concept of weekends or holidays, so I’ve rather fallen into a pattern of just living and working day by day.

Perhaps my annual trips to various writing festivals – FantasyCon, NineWorlds, Theakston’s Old Peculier Crime Writing Festival, CrimeFest and the like – are something I look forward to. Mostly as a chance to catch up with old friends and make some new ones.

One thought on “Interview with JAMES D. OSWALD”