The evil that men do…

Raised in the southern splendor of Natchez, Mississippi, Penn Cage learned all he knows of duty from his father, Dr. Tom Cage. But now the beloved family doctor has been accused of murdering the African American nurse with whom he worked in the dark days of the 1960s. Once a crusading prosecutor, Penn is determined to save his father, but Tom, stubbornly invoking doctor-patient privilege, refuses even to speak in his own defense.

Penn’s quest for the truth sends him deep into his father’s past, where a sexually charged secret lies. More chilling, this long-buried sin is only one thread in a conspiracy of greed and murder involving the vicious Double Eagles, an offshoot of the KKK controlled by some of the most powerful men in the state. Aided by a dedicated reporter privy to Natchez’s oldest secrets and by his fiancée, Caitlin Masters, Penn uncovers a trail of corruption and brutality that places his family squarely in the Double Eagles’ crosshairs.

With every step costing blood and faith, Penn is forced to confront the most wrenching dilemma of his life: Does a man of honor choose his father or the truth?

This series past me by, when Natchez Burning was first published. With the highly-anticipated final volume in the trilogy due out later this year, though, I was happy to get the opportunity to take part in the blog tour in honour of that upcoming release. Natchez Burning is a hefty book; packed with intrigue, mystery, secrets and violence. It’s an immersive, gripping and sometimes chilling novel.

Natchez Burning is a very good novel. It’s the beginning of a sweeping epic: one of family secrets, past crimes and mistakes, and the legacy of racism in the South. The cast of characters is varied and well-constructed: they are all flawed, of course, but not for the sake of it — sometimes, authors can attach flaws to their protagonists in a way to make them “complex” that doesn’t always work or make sense. This is not the case, here: each has their own motivations, some hidden until late in the novel. Each has their own past mistakes to contend with. Each of them makes at least one bad decision. This, too, was well done — there are no sudden leaps of logic or improbable epiphanies. Each character works with the knowledge they actually have. All of which adds further verisimilitude to the narrative.

Penn Cage, the nominal hero of the novel, doesn’t feature as much as I would have expected, as Iles gives many of the other protagonists and antagonists plenty of ink, too. I welcomed this, as it gives the reader a very broad understanding of the situation and others’ motives, making for an immersive reading experience. Some of the other perspective characters are reprehensible, truly evil people — Snake Knox, Brody Royal to name but two — and their actions are shocking and horrifying. True psychopaths. At the same time, many of them are fantastic and laudable characters — Henry, for example, and Penn’s father Tom (despite some mistakes that both of them make). I liked the fact that Cage’s family is not Hollywood-perfect: they sometimes fight, and Penn’s and Caitlin’s agendas and jobs often put them at loggerheads. This does not always end well, and their conflicting goals create a couple of the most dangerous situations in the novel.

Knowing that there were two other books in the series did rob a bit of the tension from the final chapters, unfortunately — this would not have been a problem for people who read this when it was first published, though. Nevertheless, Iles kept me on tenterhooks, eagerly reading to find out what happened. The novel has a number of different threads, which to begin with aren’t obviously connected. However, the various storylines converge quite nicely as the narrative progresses. The ending sets up the next book very well, too.

This is actually the fourth novel featuring Penn Cage — following The Quiet Game, Turning Angel, The Devil’s Punchbowl, and also the novella The Death Factory (all of which I have purchased since starting Natchez Burning). It is not, however, essential to have read any of these in order to fully follow and appreciate Natchez Burning.

It is probably due to these previous novels that this one feels so well-formed: the characters are realistic and complex; the locations and ‘world’ of Natchez feels fully fleshed-out and real. This is probably what jumped out at me first, and helped me sink into the story so quickly — the place felt lived in, very well established. The author gives the reader just enough from past events to situate newcomers into the narrative, but doesn’t re-hash previous cases (therefore keeping things fresh for returning readers).

Some people might think the novel is a bit too long, given that there is no overall resolution — this is very much part one of three. I think there were moments that could have been tightened up or truncated, but I cannot deny that I was hooked. Very quickly, I found myself picking the novel up at any and every opportunity, even if I only had time to read a handful of pages. The immersive, epic storytelling made it addictive. Iles’s prose is excellent, and the plotting was very good.

If you’ve never read anything by Greg Iles, I strongly urge you to do so: he’s a highly gifted writer and storyteller. This is a fantastic first book in an epic, far-reaching trilogy. Really quite excellent and impressive, Natchez Burning is very highly recommended.

I’ll be starting the next book in the series, The Bone Tree, in a week or so (I need just a short break after this one — the ending is quite the gut-punch), as a second instalment in the blog tour (my review will go up October 7th).

Natchez Burning is published by William Morrow in Canada and the US, and Harper in the UK. The Bone Tree is (and Mississippi Blood will be) published by the same publishers. 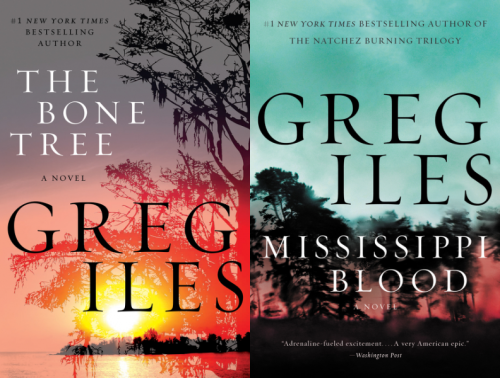 I received Natchez Burning from Harper Collins Canada, in exchange for an honest review.