Welcome back to CR! Let’s start with an introduction, for new readers: Who is Gaie Sebold?

I’m a fantasy writer and (very) occasional poet, with a partner (writer David Gullen) a small cat, and a large garden. I run writing workshops – I’m currently running a series of them for my local women’s centre. I occasionally disconcert the neighbours by plotting aloud to myself while weeding.

Your next novel, Sparrow Falling, will be published by Solaris. It’s the second novel in your latest series: How would you introduce the series to a potential reader?

It follows the adventures of a street child and professional con-artist Eveline Sparrow, in a fantasy Victorian era where the Fey and many other mythical beings exist. Eveline gets caught up in events where the politics of our world overlap dangerously with those of the Fey while discovering the truth about her past and trying to protect herself and those she cares about in the present.

What can fans of the first novel expect from the second?

Eveline trying to attain respectability for herself and the school she now runs, by less than legitimate means, a world on the brink of war, a desperate villain, Liu the fox-spirit dealing with some extremely awkward family issues, Ma Pether being very… Ma Pether, and more ventures into the glittering but dangerous worlds of supernatural beings both British and Chinese.

I’d been wanting to try my hand at steampunk for a while. I find the Victorian era fascinating, partly in the contrast of huge scientific advancement and movements for social reform with terrible exploitation and appalling poverty. And I have a long-term interest in the mythical creatures of both the British Isles and elsewhere, and how really unpleasant, manipulative, scary and just plain odd a lot of them are. I draw inspiration from fiction, mythology, history, art, film, theatre… my brain is a bit of a grab-bag. I once got an entire character and backstory from a single random piece of costume I bought at a convention.

It’s always been part of my reading. A lot of the stories I read as a child would fall into the realm of fantasy: Alice in Wonderland, the Doctor Doolittle books, fairy tales and so forth. I simply retained my interest in magic and other worlds. I do remember the first science fiction novel I actually bought – Edgar Rice Burrough’s A Princess of Mars, secondhand at the school fete, when I was about nine. I can see the cover now!

The Sparrow novels are your second series. What lessons did you learn from writing your Babylon Steel series, and how have your experiences writing those novels informed your new fiction?

I learned that I really need a handle on the central characters, that I can’t move forward without having a strong sense of who I’m writing about. And that I’m a real combination of pantser and plotter – I fling myself in, then stop, and plan, then fling, then plan, and so forth – and though I have become a bit more of a planner, I seem to be both by nature. All the most interesting ideas come when I’m charging ahead, but then I have to work out what I can use, and how to make it all fit together. I learned that it’s OK not to try and use every single idea you have in one book. And that sometimes minor characters decide they are not minor, thank you very much, and they’re going to throw aside that spear they were carrying and take centre stage. Application is another matter: some things I seem to have to relearn with each book.

I started writing almost as soon as I learned to read, so my first forays into writing are lost to history. I do remember writing a story about a unicorn when I was in primary school, where the ‘I’ writing the story and the unicorn got sort of mixed up. If I did it now I could say I was exploring identity and myth, or something. As it was, I was just your average seven-year old with cloudy boundaries between the real and the imagined, and I really wanted to be a unicorn.

I think there is a lot of wonderful work around in genre. There’s some that… isn’t so wonderful, but that’s been the case in every type of art throughout history. I think genre is also getting a lot more interest and respect from the mainstream, for all sorts of reasons. There’s a push to recognize and promote the work of women, POC, and LGBTQ writers — a long, looong way to go on that, but at least it’s happening, though it does sometimes seem to be two steps forward and three backwards. I think there’s a lot of great work being done in the small press and self-publishing too – writers, styles and subjects that wouldn’t be an obvious pick for big publishers are getting a chance. All of this means wider perspectives, fresh ideas, fresh chances for interesting collaborations, collisions, jumping-off points. The wider the imaginative gene-pool, as it were, the better and healthier for the genre. As to where my work fits in – agh. Now you’re asking. I hope I’m writing entertaining fiction that makes people think a bit, and maybe gives young  girls some active, powerful characters they can see themselves in, heroes for their hearts.

I have far too many projects in the pipeline! I’ve got plans for at least two more Babylon Steel novels, depending on circumstances, a collaboration with my partner which is sort of a steampunk adventure romp, a prehistoric crime novel and a space pirate fantasy. Among others. At the moment I’m working on a rather large fantasy novel which is dragging itself like a rough beast towards the end of a first draft.

I’m reading a fictionalized history of Julie D’Aubigny, called Goddess, by Kelly Gardiner, which I’m enjoying very much.  I just finished the second in the Kushiel’s Legacy series by Jacqueline Carey, which I highly recommend. And still there is the Tottering Tower of Guilt that is my TBR pile. 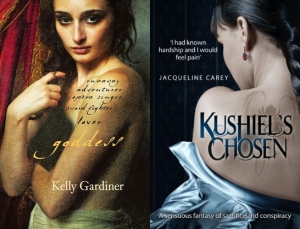 Oh, I couldn’t possibly do that! I have far too many favourites. It would depend what that person wanted to read – something life-affirming, something grim, something tough and intellectual, something fun and easy? Crime, horror, SF, fantasy, straight fiction? I couldn’t name just one even in each category!  But if I absolutely had to recommend just one author… no, I can’t do it.

I don’t know, it rather depends how readers see me. I think I tick a lot of the fantasy-writer boxes, to be honest. Did LARP, did a martial art involving swords, has a cat… I once played Madame Arcarti in a college production of Blithe Spirit, how about that

Finishing the current book! There’s nothing as much fun as finishing  a book… except starting the next one. That lovely innocent phase where you still believe that the book in your head might actually end up on the page. So yes, starting the next book, probably.

Gaie Sebold’s Sparrow Falling is published by Solaris Books. For more on the author’s writing and novels, be sure to check out her website, and follow her on Twitter and Goodreads.