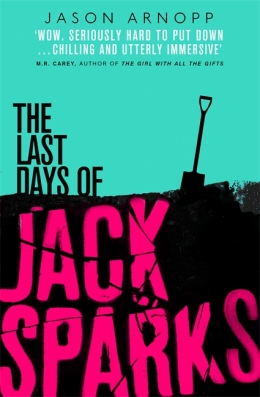 It was no secret that journalist Jack Sparks had been researching the occult for his new book. No stranger to controversy, he’d already triggered a furious Twitter storm by mocking an exorcism he witnessed.

Then there was that video: forty seconds of chilling footage that Jack repeatedly claimed was not of his making, yet was posted from his own YouTube account.

Nobody knew what happened to Jack in the days that followed — until now.

The Last Days of Jack Sparks was definitely one of my most-anticipated novels of the year, and I’m very happy to report that it did not disappoint. It is entertaining, chilling and addictive. I really enjoyed this.

Arnopp has constructed this novel around the “unedited manuscript” of  infamous shock-journalist Jack Sparks’s last book — an attempt to debunk the existence of the supernatural. The book has been “edited” by his brother, and is semi-epistolary: it includes extra materials for context and fact-checking purposes, such as commentary from Alistair, interview transcripts with sources and contacts, email exchanges and more besides. I loved the way Arnopp wove these documents into the narrative, providing alternative accounts of and perspectives on what Sparks was experiencing. Not only that, as we read more from each person involved, you quickly come to realize that everyone involved is an unreliable narrator. Each has his or her own agenda, their own set of beliefs and prejudices. Jack’s own passages are sometimes sanitized to (of course) make himself look great and others less impressive. The use of modern technology and its place in ghost-hunting, etc., was also very well-done.

Jack Sparks is a journalist in the mould of Paul Theroux and Danny Wallace, but only if those two were so very, very narcissistic and had little conscience. There is a dash of Hunter S. Thompson in there, too. In fact, if you were to mash up Fear and Loathing in Las Vegas and The Exorcist, you may get something like Arnopp’s novel. A lot happens, each event building brilliantly into the next, composing multiple layers of strange and spooky shenanigans on top of each other. I don’t want to spoil anything, so despite my wish to discuss certain things in detail, I will resist — it’s a novel that suits going in mostly-blind very well.

It is also a novel about beliefs, bias and faith — how we create these for ourselves, how we develop them, and how we address them when confronted by conflicting information. Is Sparks just being a dick, wanting to debunk all of these theories and beliefs in ghosts, the supernatural, God? Or is there something else going on? Doth he protest too much?

This is a rare novel that has made me both laugh out loud (for example, during an early email exchange between Jack and his agent) and also feel that spine-tingling sensation when you know something bad or scary is going to happen. (This is one to read with the lights on, I think.) I loved the way Arnopp tied the story up at the end, leaving the reader not entirely sure about what has actually happened, or what may have just been in Sparks’s addled mind.

The characterization is excellent, the pacing near-perfect, the prose tight and well-crafted, the story gripping and chilling. The Last Days of Jack Sparks is a must-read of 2016. I can’t wait for Arnopp’s next novel.

The Last Days of Jack Sparks is published by Orbit in the US and UK.

One thought on “Review: THE LAST DAYS OF JACK SPARKS by Jason Arnopp (Orbit)”