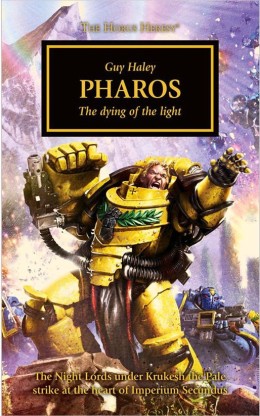 The Tower of Sotha besieged

With the noble Emperor Sanguinius ruling from Macragge, Imperium Secundus stands as a lone beacon of hope even as the Warmaster’s forces continue to ravage the rest of the galaxy. Roboute Guilliman, still Master of Ultramar, has convinced his brother that Terra has fallen and that the mysterious Mount Pharos on Sotha now holds the key to mankind’s future. But the Night Lords, those cruel and pitiless sons of Konrad Curze, have been watching from the shadows, and make ready to launch their long-planned attack on the Pharos itself…

This is Guy Haley’s first full-length contribution to the Horus Heresy series, and Pharos is a very good addition to the series. Populated by interesting characters and strange, alien tech, the novel brings some minor plot threads to a close while also moving the story forward a bit. I enjoyed this.

This is the first Heresy novel I’ve read in a while when I felt like I’d missed something. This is by no means Haley’s fault, but rather the combination of two things: first, that it’s been a long time since I read a sustained amount of Heresy fiction; and second, I haven’t been reading everything in the series. As a result, I’ve now missed a lot of audio-dramas, novellas and a few short stories. After some digging, I learned that some of what I missed was covered by Haley in an earlier audio-drama, The Heart of Pharos. As it turned out, though, it’s not essential to have listened to that story to follow Pharos. In fact, Haley does a great job of filling in some blanks, providing background and context for various features of the Pharos Tower, and also the general state of the Heresy at that time.

On the evidence presented by Pharos, Haley’s greatest strength lies in characterization: each character featured feels fully realized on the page. Each has their own distinct character traits, and none of them felt two-dimensional. Whether they are human auxilia, murderous Night Lords, noble Ultramarines, or the other randoms sprinkled throughout the story, readers will become invested in their fates — which is dangerous, as the novel has a pretty high body-count. I enjoyed the friendship between the Imperial Fist Pollux and loyalist Iron Warrior Dantioch, the two wardens of the Tower of Pharos. The relationship between the two Night Lords brothers (actual brothers, as opposed to merely martial brothers) was very interesting, too.

Yes, the story is still focused on the events in Imperium Secundus, and doesn’t push the overall story as far forward as many might like. But, Haley has nevertheless written a very good addition to the series — solid story-telling, three dimensional and interesting characters, restrained descriptions, and decent action.

The ending was very good, if just a little muddled — not everything that happened in the Pharos was entirely clear, but that may have been on purpose. There was also some old-school Chaotic goings on — or, at least, what I think of as ‘old-school’ (you’ll probably notice it when one of the Night Lords gets his new sword…).

Overall, I enjoyed this. It’s not the strongest novel in the series, but I enjoyed the focus on characters very much. Certainly recommended to all fans of the Horus Heresy series.

Also on CR: Interview with Guy Haley (2015); Review of The Emperor’s Railroad