It was the title that first came to me: Who Killed Sherlock Holmes? And from there, the pieces just fell into place. In the London of my Shadow Police novels, ‘ghosts’ are the collective memories of all Londoners, and so include fictional and mythical characters, as well as those who were once alive. Therefore, Sherlock Holmes would very much be present, in 221B Baker Street, as a phantom, visible only to those with ‘the Sight’, like my Metropolitan Police heroes. Perhaps the phantom’s cohesive presence could have been recently amped up, say by three different current versions of Sherlock Holmes all filming in London at the same time, creating ‘Sherlockmania’?

What if that ghost were to be ‘murdered’, found lying face down with a ceremonial dagger in his back? What’s the motive? What does killing a ghost even mean?

The crime is somehow connected to a whole series of incidents: the crimes from the stories of Arthur Conan Doyle are being recreated, at their original locations across London, in order.

Like I said, it all fell into place, not that it wasn’t a hell of a lot of work to put all the clockwork together. The matter of where the original stories are set is sometimes quite complicated, but also brought up some exciting synchronicities. It’s wonderful how much the mere geography of London can still entertain me. My coppers, still devastated after the events of the last book, have a pure whodunnit to solve, of a most unusual kind, which also offers, along the way, some fond satire of the current Holmes industry. (The novel’s garnered cover blurbs from both Steven Moffat of Sherlock and Rob Doherty of Elementary, so I can’t have nudged them too hard.) We meet three actors playing three takes on this endlessly mutable character. Indeed, how Holmes changes with the times is at the heart of the novel. The ‘corpse’ my heroes find is cycling in appearance, flickering between thousands of different versions of Holmes. The deer stalker flutters less.

I’m told by readers who haven’t read the first two books, London Falling and The Severed Streets, that this one is entirely comprehensible to new readers, and so represents a good jumping-on point, so please feel free to come for the Holmes and stay for the Shadow Police, you won’t get lost. It seems to be a very Holmes year for me, what with writing an episode of Elementary as well. If pop culture has now achieved ‘Sherlockmania’, it seems I’m caught in the middle of it. And I couldn’t be happier.

Who Killed Sherlock Holmes? is published by Tor UK on July 19th, 2016.

Paul Cornell has been Hugo-nominated for his work in TV, comics and prose, and is a BSFA award-winner for short fiction. He has also written some of Doctor Who’s best-loved episodes for the BBC, and has more recently written for the Sherlock-inspired TV show Elementary,* starring Jonny Lee Miller and Lucy Liu. He lives in Gloucestershire. Find out more on his website, and by following him on Twitter and Goodreads. 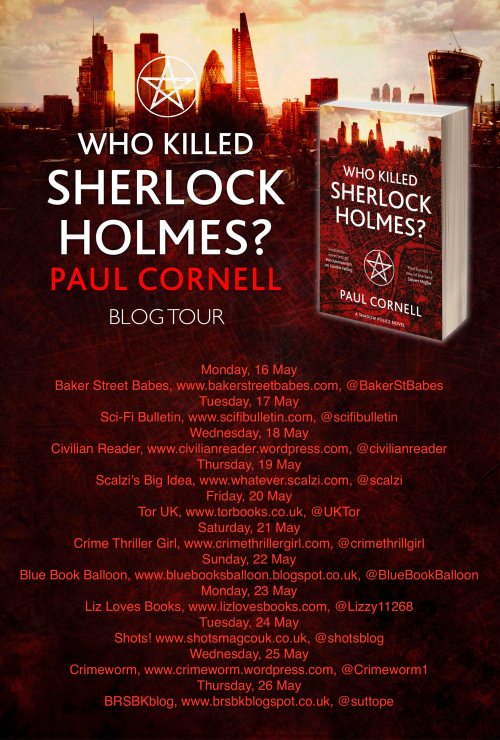 * CR’s Note: Paul’s episode was fantastic, and probably my favourite from the past couple of seasons.

6 thoughts on “Guest Post: “Stuck in the Middle with Sherlock” by Paul Cornell”