Skip to content
HomeGuest Post: “The World Around Me (And the World Within Leviathan’s Blood)” by Ben Peek

I was a teenager when I walked through my first snowfield. The snow was artificial, of course. It was winter in Australia and the snow machines sat on the side of the fields, like fallen barrels.

The High School I went to took us up to the snowfields on an excursion. To be honest, I can’t tell you why. It’s strange, but over the years, I’ve forgotten the reasons for all of the excursions I went on in school. Like an amnesiac super soldier, I can’t explain to you why I was in Canberra in 1990, or in Melbourne in 1989. It would be nice if I was part of a secret cartel of child assassins, but in all honesty, I suspect we were just there because our parents needed a break. Whatever shadowy deal the school did with our parents (as schools everywhere do shadowy deals with all parents) the deal was made to take us up to snow fields in June. There, we rode ski lifts up to the top of a mountain that none of us could ski down. Later, we rode the lifts back down.

It might appear that this anecdote is a strange way to introduce a fantasy novel, but it makes sense, really.

See, before that day, I had only seen snow on TV, or read about snow in books. I think the first time I read about a country defined by a white, wintry apocalypse that forced everyone to grow a beard was in David and Leigh Eddings’ Pawn of Prophecy. In that book, the farm boy who would be king, Garion, is taken to Cherek, a nation defined by snow, beards, and Bear Cultists. I read the book in an Australian summer and the cold landscape was so alien to me that it wasn’t until I was much older that I realised that Cherek, and indeed, of all Eddings’ world, was built out of the much used descriptions of Europe. Later, after I’d read dozens and dozens of fantasy books, I came to realise that somewhere in the world, the rolling fields, snow capped mountains, castles, and lakes were a common occurrence. These landscapes, I soon realised, were as familiar to the authors of the books I read as my world of sub tropic weather conditions, violent animals, and even more violent form of colonisation was to me.

It was why, when I began to write my fantasy series, that I began to look at the world around me.

I started with Australia, with my home. Its history is one of an awful colonisation to establish a penal colony. There is, I think, a certain sadness at its core. Its unique culture is one of the planet’s oldest. It lies across the country, at times as tourist sites, at times built over, and at times lost by all but small groups of people. Australia’s size is, likewise, difficult to comprehend to people. The huge, hot centre that few people live in. The crowding of the cities around the edges. The brightness of the sun. It all filtered easily into my work, but I found that as I wrote, Australia was not all that I drew upon. I found myself thinking of the countries around me, like Sri Lanka, Papa New Guinea, New Zealand, Malaysia, Thailand, and so on and so forth. All of these were part of the world around me. They were part of the people I knew, the conversations I had. Why shouldn’t they, I asked myself, be in a fantasy novel?

I based, for example, one of my major locations on The Knuckles Mountain Range in Sri Lanka. It was originally called Dumbara Kanduvetiya, but the British renamed it in such a way that it was easier to pronounce. They named it the Knuckles Mountain Range because, at a distance, it looked like a fist. It was the look that I was inspired by for the Mountains of Ger, as well as the dense forest, the streams, and the sense of an entire, isolated world contained within it. There was to be no snow on the mountain, not like a traditional, European fantasy mountain. My range was to be like those in Sri Lanka (where, admittedly, snow can happen very rarely).

There’s more, of course. My inspiration for all the landscapes and cities and people in Leviathan’s Blood was drawn from the world around me, and I hope that, for those who are reading the book, that it makes a unique and interesting experience.

Leviathan’s Blood is published by Tor in the UK on April 4th, and in the US by Tor Books on May 31st. The first novel in the series, The Godless, is also published by the same publishers. Ben Peek has been shortlisted for the David Gemmell Award for Best Debut Fantasy and the prestigious Australian Aurealis Award. He lives in Sydney with his partner, photographer Nikilyn Nevins, and their cat, Lily. For more on his novels and writing, be sure to check out his blog, and follow him on Twitter and Goodreads. 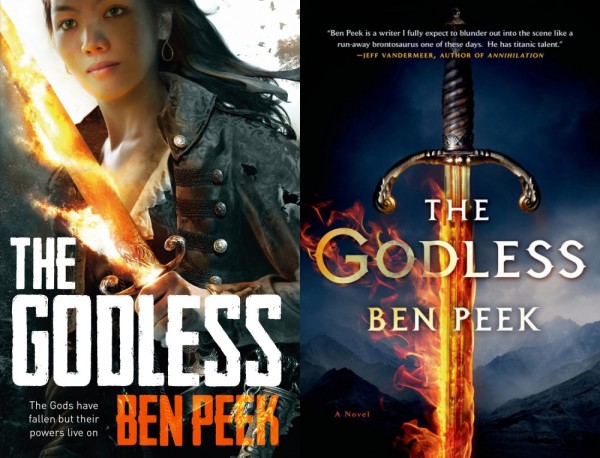