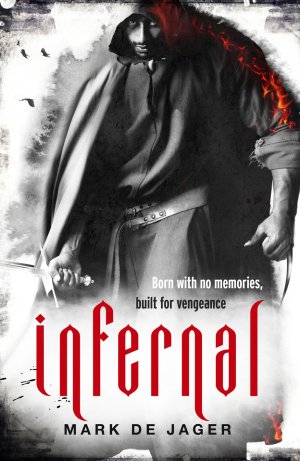 I’m really interested in reading Infernal. Mark de Jager has been a Twitter-acquaintance for quite some time, and this is his debut fantasy novel. I don’t remember exactly when I first heard that it had been acquired by Del Rey UK, but I remember reading the synopsis and thinking, “That sounds pretty great.”

While I’m not wholly keen on the cover (I do like the flame-y sleeve, though), check out the synopsis to see what I mean:

Stratus wakes in an unfamiliar place, with nothing but the knowledge that he is not human, with no memories of his past but possessing great strength, a powerful sorcery and the burning instinct to survive at any cost.

Embarking on a journey of self-discovery, he sets out across a landscape torn apart by the ten year war between the Kingdoms of Krandin and Penullin, now reaching new levels of savagery as a dark magic drives the world to the brink of destruction.

As his personality grows with each step he slowly uncovers the truth of what he has become and the unquenchable thirst for vengeance that has led him there.

Infernal is due to be published in the UK by Del Rey, on August 11th, 2016. Looking forward to it.