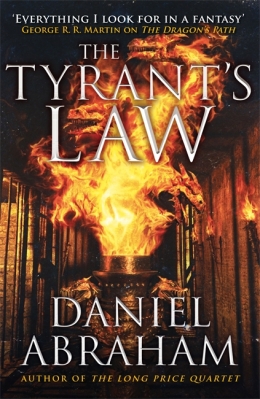 The Dagger and the Coin, book three

The great war cannot be stopped.

The tyrant Geder Palliako begins a conquest aimed at bringing peace to the world, though his resources are stretched too thin. When things go poorly, he finds a convenient target among the thirteen races and sparks a genocide.

Clara Kalliam, freed by having fallen from grace, remakes herself as a ‘loyal traitor’ and starts building an underground resistance movement that seeks to undermine Geder through those closest to him.

Cithrin bel Sarcour is apprenticing in a city that’s taken over by Antea, and uses her status as Geder’s one-time lover to cover up an underground railroad smuggling refugees to safety.

And Marcus Wester and Master Kit race against time and Geder Palliako’s men in an attempt to awaken a force that could change the fate of the world.

As I’ve gotten older, I’ve become a much more discerning reader. I have to work a lot harder to carve out reading time these days, so I’m much more picky about what I read. My pickiness reaches even greater heights when it comes to book series. Let’s face it, if it is hard to commit time to one book, it is even harder to commit to three, four, five, or – if it is a Sanderson or Erikson series – ten or more books. But, here’s the catch: I love epic fantasy. So, I’ve adopted a stance where the author has to keep me interested in the series book after book after book. It’s no longer a case of, “Well I liked the first book in the series, so I gotta read ‘em all.” If a series isn’t up to snuff, I’m done. I’ll move on. Harsh, maybe, but there’s so many books out there that sound amazing! Anyway, Daniel Abraham has been doing his part of keeping me interested in his Dagger and Coin series, so I gotta do my part and keep reading.

I guess, since people don’t like spoilers, I should note here that there will be spoilers for books one and two in this review… Obviously.

For me, the best thing about Abraham’s Epic Fantasy series, is the characters. Simply put, they are great. Also, I really enjoy how he gives the reader an epic fantasy, but through a limited (for the subgenre, that is) number of P.O.V. characters. So far (remember, I’m always on the fence with any given series), this series is proof that you don’t need a cast of thousands to pull off something epic. Instead, Abraham does it all with four POV characters. So, let’s check in on them, from my personal ranking order of least liked to most liked…

Geder: I hate this fucker.

Before I go any further, I should say that I “hate” him in the best possible way. Abraham has worked evil, evil wonders with this guy, taking him from the bookish intellectual I could relate to in the opening pages of the series to the genocidal, tyrant shithead he is now. It’s really an impressive arc, and it is nice to have someone to root against.

In The Tyrant’s Law, as you may have guessed from the title, Geder is up to more evil shit… all in the name of doing what he believes is best, or in the name of love, or in the name of his new spider god. His deluded decision-making is infuriating, ugly and unsettling, which somehow makes for great reading. I love and loathe his POV chapters.

Marcus: Honestly, I find Marcus a bit dull. He’s kind of your standard, past-his-prime, scarred-by-life-but-can-still-kick-some-ass hero we see all too often. Pick an aging white actor who still stars in action films and you’ve pretty much got yourself Marcus Wester. In this book, he’s teamed up with another prominent, non-POV character, Master Kit, and they are on [*yawn*] a quest. Yes, there’s a magic sword. Thankfully, it doesn’t end the same way as every other magic-sword-seeking-quest… Still, I found Marcus’ chapters to be pretty boring this time around. Hopefully, things pick up in the next installment.

Cithrin: In the past, I have been a big fan of Cithrin’s chapters. She’s always in above her head, into something interesting, and is great at using what resources she has available to get what she wants. I find her somewhat selfish, but that’s one of my favorite things about her. This time around, she’s finally all official with the Madean Bank, has an apprenticeship with a branch in a new part of the map, and things seem to be going smoothly. That is, until her new city falls under military control of Geder’s Antean Empire. The result is that she finds herself doing something completely out of the normal bounds of her character. And it is great. I can’t wait to see what’s in store for her next.

Clara: Recently widowed, the former wife of a traitor to the Antean Crown, Clara has fallen on dark times, but she has her stalwart companion/boy-toy, Vincen Coe by her side, as she works as a low-budget, female version of the Godfather: calling in favors, utilizing old loyalties to pull strings, all in the hopes of taking down Geder’s evil empire. Unlike her recently departed husband, Clara is far less ham-handed and brash in her plots and schemes. She’s the character whose POV chapters I most look forward to.

The characters really are what make this series great, and they are the primary reason I’ll keep reading. Like many middle books in a series, this one tends to fall into the “move the characters around like pieces on a chess board” category a bit, but only a little. Also, since there are only a handful of characters, it doesn’t feel as heavy-handed as it sometimes does in other series.

Without delivering too much of a cliffhanger ending, Abraham gives the reader (especially this one) plenty of reason to come back for more. This series has had a bit of a slow-burn feel to it for the first three books, but my instincts tell me things are poised to blow up in the next two installments. I’m on the hook for at least one more!

The Dagger & the Coin Series: The Dragon’s Path, The King’s Blood, The Tyrant’s Law, The Widow’s House, The Spider’s War (March 2016) 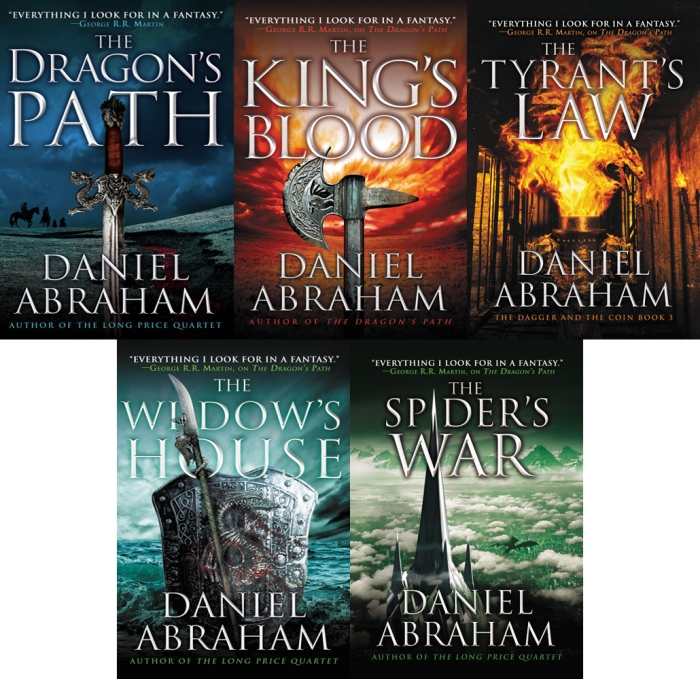 One thought on “Guest Review: THE TYRANT’S LAW by Daniel Abraham (Orbit)”