My creative method is simple. I lock myself in a darkened room and scream at a blank sheet of paper for an hour until something comes to mind.

I jest, of course. It’s typically a half-hour, tops.

It can’t always be so tough of course. Some days are better than others, right enough. There’s even times when the ghost of an idea can roll right up beside you, start to whisper in your ear.

I have a 20-month old son who loves cars, and the Disney-Pixar movie Cars, and planes, which he calls cars. He also likes Planes. When Christopher’s not looking stylish in hats — or, you know, fighting orcs — we’re watching Cars.

Around about the two-hundredth viewing I noticed an angry Doc Hudson, setting out his plans for the car that’s just wrecked the main road into town.

A throwaway remark that had passed me by on many previous viewings of the movie; it demonstrates how annoyed the Doc is, and then gets cast aside as the plot moves on. But there it is: whisper-whisper. Think of a prisoner who outlives their prison, is what that voice says. Imagine the kind of a person that could be.

It’s a little something to scribble down and set aside for later. 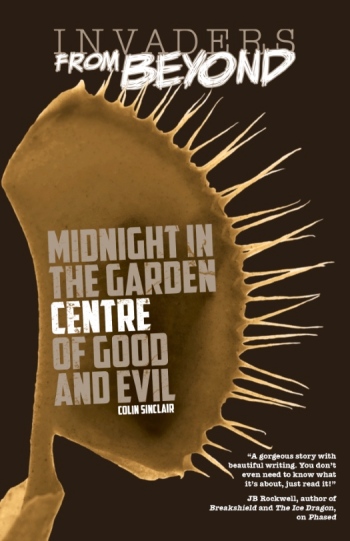 It was a similar story with Midnight in the Garden Centre of Good & Evil.

That one started with the title. How could it not?

Midnight in the Garden of Good & Evil is a serious piece of Southern Gothic narrative non-fiction by John Berendt; and also a film by Clint Eastwood.

Midnight in the Garden Centre of Good & Evil is very much neither of those things. Although obviously I’m still holding out hope for the movie deal.

Firstly, it was a joke. A little tweak of the title to elicit a wry smile, and then I move on to other stuff. Important writery stuff, I assure you. Except. Garden centres, eh? There’s a thing.

When I was a kid, walking to a garden centre of a Sunday morning and wandering around was a thing we did as a family. We didn’t have a car at that point, and our nearest centre was just close enough to keep the trip in the realms of journey-to-adventure and away from aww-mum-do-we-have-to?

There were narrow country roads, dangerous drivers and multi-lane carriageways to navigate before we reached our destination, but wasn’t all of that just part of the fun?

And the garden centre itself? Glorious.

Who needs swings and slides and parks (which — funny story — were closed on Sundays anyway) when you can have plants-in-pots, stacked bags of peat and compost, racks of seed in bright packaging, crumpled brown paper bags of bulbs? There’s nothing like walking down and down the long narrow avenues of shelving, staring at the serious, shining blades of pruning shears and grass shears and lawn shears and… To be honest, I think almost everything in the has-a-sharp-edge department had the word shears in its name. To show they meant business.

And all of that wrapped up in a particular damp and heavy scent of fresh things growing. Never mind Proust and his madeleine cakes; it’s the familiar, warm-earthy, chemically bright, everything-is-living aroma of the garden centre that brings back childhood for me. Bliss.

So, let’s face it, what could possibly be evil about a garden centre?

Only one answer for that, isn’t there? Aliens!

Midnight in the Garden Centre of Good & Evil is published by Abaddon Books. For more on Sinclair’s writing and novels, be sure to check out his website, and follow him on Twitter and Goodreads.

Miller, fresh from too many pampered years at university, has managed to lose a PhD, a girlfriend, and her father’s car. With parents now committed to a regime of find-your-own-way tough love, he’s fallen off the fast track to success, and finds himself working in a shabby garden centre on the edge of nowhere. The staff are a collection of dropouts and oddballs, the boss is very shady, and Miller’s not sure half the stuff they sell is legal.

Still, he’s learning to get on with things and make do, finding a brand new path through life, but… an alien invasion disguised as a bright and shiny big-box store from out of town? That really isn’t helping.

If Miller wants to protect his job and save the world, he’s going to have to dig deep and get his hands dirty.

One thought on “Guest Post: “Process Story” by Colin Sinclair”