Skip to content
HomeGuest Post: “How a Fourth Book is Really the Beginning of a New Series” by Clay & Susan Griffith

THE GEOMANCER: The Return of the New Vampire Empire

Hi. We’re Clay and Susan Griffith, authors of the Vampire Empire books and the Crown & Key trilogy. Our newest book, The Geomancer (November 3, Pyr Books), is the latest in the Vampire Empire novels. It’s the fourth book we’ve written set in that world, but it’s the first book in a new ongoing “Gareth and Adele” series. The original Vampire Empire was a trilogy. It was conceived and executed as a trilogy. By the end of the third book, we brought the major storylines to a close and tied up most of the questions. The characters had developed over the course of three books. We proudly considered the story done and moved on to other projects.

Only it didn’t quite work out that way. 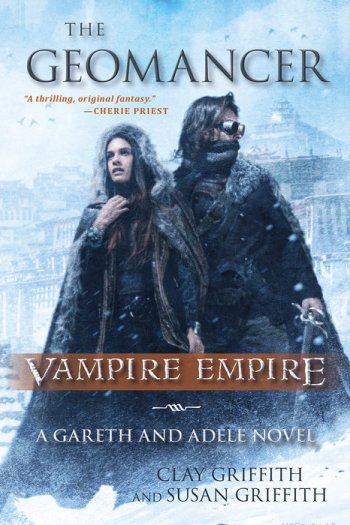 Readers (God bless them!) wanted more. We were so gratified by how readers embraced the main characters – Empress Adele and her paramour Gareth – as well as the mysterious Greyfriar. At the end of the trilogy, Adele and Gareth had grown and settled into a relationship, but it was one that seemed doomed and that they had to keep secret from everyone except their most trusted allies. The world itself had changed a great deal between the first and third books, but it was still left in flux because history never stops. We had plunged the world into a war that apparently could only end with the extinction of one side or the other, humans or vampires.

In addition to the requests from readers to know “what happens next,” we also missed Adele and Gareth, and all the other characters. We had lived with them in their world for nearly a decade from concept to plot to novels. We loved them all, even the bad guys. As we worked on our second series, Crown & Key, we found ourselves floating ideas for more Vampire Empire stories. At first, it was an unwelcome distraction, but with time we found our old friends pleasant company again. We stopped fighting them and elements began to click into place. Soon we had a new book to be written.

What we didn’t have, however, was a whole new trilogy. The story we had outlined was smaller than the original Vampire Empire epic, and that was on purpose. We didn’t really want a new trilogy. If we were going to write more Vampire Empire, we wanted to settle into our world and explore all the nuances that sometimes get lost when pushing the alternate history and driving the grand events of war and empire. We wanted space for the characters to grow and breathe. We wanted new books to stand alone while still fitting into continuity.

The goal was to make The Geomancer satisfying and comfortable to our existing readers as well as accessible to new readers who hadn’t experienced the original trilogy. If you’ve already read the Vampire Empire trilogy, you will fall seamlessly into this story. It will answer some of the questions you have from the first books and carry you into new adventures. But if you never read the first three books, you can still jump into The Geomancer without a problem. It is a standalone urban/historical fantasy that will introduce you to the characters and the world while throwing you into a wild story.

The most difficult but gratifying element about this new start for Vampire Empire is that it encouraged us to look at the characters and the world with fresh eyes as we wrote. Because this book is going to be new for many readers, we had to discover and explore everything all over again, as if it was a new project. It was a terrific exercise in writing, and it allowed us to rediscover what made our characters, particularly Adele and Gareth, so meaningful to us. It also forced us to explore the most important themes of the series and we found all sorts of cool ideas and subtexts that even we hadn’t quite crystallized in the original trilogy. We found a renewed depth in the material and it reinvigorated our love of these characters and the world they live in.

So The Geomancer will both introduce and broaden the world of Vampire Empire. It will tell very human stories against the vast backdrop of a world convulsing in war. We’re very excited, and even if we go off to write other projects, we will always have one foot in the Vampire Empire world as long as readers want to go there with us. 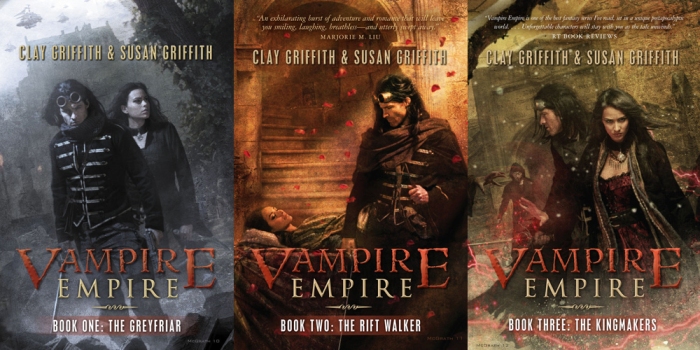 The Geomancer and the Vampire Empire series are published in November 2015 by Pyr Books.

The Crown & Key trilogy is published by Penguin Random House.

Clay and Susan Griffith, a married couple who have written and published together for more than two decades, are the authors of the Vampire Empire trilogy — The Greyfriar, The Rift Walker, and The Kingmakers — and the Crown & Key trilogy, as well as the first Vampire Empire: A Gareth and Adele novel, The Geomancer. Their credits include numerous short stories featuring noted genre characters like Kolchak the Night Stalker and the Phantom and comic books including The Tick and The Simpsons. They’ve also written scripts for the television/web show Monster Creature Feature. They live in North Carolina where they play World of Warcraft and struggle to entertain their cat.

One thought on “Guest Post: “How a Fourth Book is Really the Beginning of a New Series” by Clay & Susan Griffith”