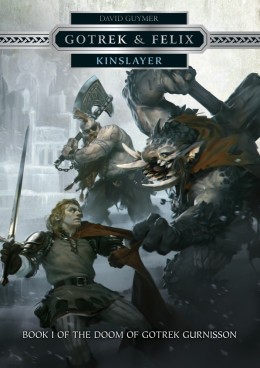 The Doom of Gotrek Gurnisson begins…

Once companions on the greatest of adventures, Gotrek and Felix have long since gone their separate ways. Felix, married and settled, secretly craves the excitment of his youth. And when the opportunity arises, Felix embarks upon what might be his final journey. As the chaos of the End Times engulfs Kislev, Gotrek and Felix are reunited, battling the hordes of the Troll King alongside Ulrika, Snorri and Max. But when long-hidden secrets are revealed, these old friends will be torn apart, and not all of them will leave Kislev alive…

Long-time readers of CR will know that I’m a huge fan of Warhammer heroes Gotrek Gurnisson and Felix Jaegar (because I mention this fact a lot). The characters and series were created by William King, back in the late 1980s, and the series has continued pretty much uninterrupted ever since, until March of this year, when David Guymer brought it to a close with Slayer. Kinslayer is an interesting first half of a finale, tied in nicely with the Warhammer End Times storyline. It is not without its weaknesses, but it is also a must-read for fans of the series.

David Guymer is the fourth author to work on the Gotrek & Felix series, following King, Nathan Long and Josh Reynolds. I’ve read all of the novels by King and Long, but only the short stories by Reynolds and Guymer up until Kinslayer. I’ve enjoyed pretty much everything I read so far, and I still think King’s and Long’s novels featuring these two heroes are among my favourite fantasy novels. Therefore, coming to Kinslayer, I had very high expectations — unfortunately, they weren’t all met.

The story is set after Gotrek and Felix have parted ways. The latter is languishing in Altdorf, penning propaganda for the Empire. He’s miserable, restless, and bored out of his mind. This is unsurprising, given his action- and peril-packed decades travelling and fighting with Gotrek. In short order, Guymer fills us in on what’s happened since he returned to the capital city, his troubled mindset, and his conflicted emotions about staying with his prematurely-ailing wife, Kat (who first appeared in Trollslayer). After Ulrika appears, he is drawn away from his life and back into action — only, this time, the End Times are unfolding, and there is no guarantee that he, or any of his comrades, will survive the gruelling journey.

It surprised me how long it took for Gotrek to turn up, and then for the two heroes to be reunited. I had expected more from their reunion, too (although, to be fair, so did Felix). A few new names are introduced into positions of prominence (Felix’s nephew, for example), and there is action and battle aplenty. If I’m honest, much of the first half of the book, maybe a bit more, could have been shortened considerably: only once the action arrives in Kislev, and series regulars appear properly, does the story really get going. It took me a while to sink into the story, despite thinking Guymer does a good job with the characters. Gotrek feels much gruffer and far less likeable as a character than he did in King’s and Long’s novels — perhaps this is explained by his own (mis)adventures separate from Felix, and also his single-minded determination to finally meet his doom. With the End Times upon them, he comes across as far more focused and intolerant of others’ needs.

There are some bittersweet moments towards the end, as well as a heart-breaking storyline that weaves its way through the whole novel, up until the end. This, I thought, Guymer did rather well — there’s a slow realisation of what is being hinted at, followed by a slowly-growing sense of doom as we figure out what is the inevitable conclusion.

The novel relit my interest in reading through the End Times novels and background books — I’ve read a few of them, now. I’m not convinced this duology needed to be two novels. True, I have yet to read Slayer, so maybe I’ll realize what prompted the decision once I have. Kinslayer, while very good, felt overlong and like a hurry-up-and-wait exercise before the final volume. Save for the aforementioned final third (or-so), which did offer a pretty good pay-off.

I’ll be reading Slayer soon, but as part of a chronological read-through of the End Times fiction. In the meantime, Kinslayer is definitely recommended for long-time fans of the series.

David Guymer’s other Gotrek & Felix novel is City of the Damned.