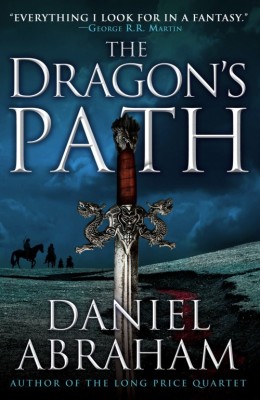 The Dagger & the Coin Book One

All paths lead to war…

Marcus’ hero days are behind him. He knows too well that even the smallest war still means somebody’s death. When his men are impressed into a doomed army, staying out of a battle he wants no part of requires some unorthodox steps.

Cithrin is an orphan, ward of a banking house. Her job is to smuggle a nation’s wealth across a war zone, hiding the gold from both sides. She knows the secret life of commerce like a second language, but the strategies of trade will not defend her from swords.

Geder, sole scion of a noble house, has more interest in philosophy than in swordplay. A poor excuse for a soldier, he is a pawn in these games. No one can predict what he will become.

Falling pebbles can start a landslide. A spat between the Free Cities and the Severed Throne is spiraling out of control. A new player rises from the depths of history, fanning the flames that will sweep the entire region onto The Dragon’s Path-the path to war.

The novel centers around four main point-of-view characters who head up their own chapters (a fifth character gets a couple of POV chapters towards the end) and their storylines intertwine, connect, and brush up against one another in a variety of ways throughout the book. On both reads, I was more or less split down the middle on these major players and they fell into two camps: characters I liked and characters I had mixed feelings towards. On the one hand, you have Cithrin, an orphan girl (thankfully devoid of any prophecies attached to her) who is the ward of the Medean bank. Said bank just so happens to be located in a city that is soon to come under siege and young Cithrin is tasked with the difficult duty of smuggling a large portion of the bank’s wealth out of the city and to another of the bank’s branches in another, far off city.

In order to do so, Cithrin takes her bank-fortune-loaded cart and joins a merchant caravan which is guarded by none other than Marcus Wester, a soldier with a heroic reputation, but who has fallen on dark times and finds himself relegated to guarding merchant caravans. To make matters worse, his entire crew (except for his ever-reliable second in command) have got themselves arrested and press-ganged into the city defense force. In order to avoid getting press-ganged himself, Marcus is forced to hire on a theater troupe to play-act as guards in order to land the caravan guarding gig. Sound like a recipe for disaster, mayhem and entertainment? It damn sure is. I found Cithrin and Marcus’ chapters extremely exciting and engaging. In a book with very strong character building, these two stand out as being both relatable and easy to root for.

On the other hand, there are two POV characters I struggled to like. First up is Kalliam Dawson. Dawson is a lord of the Antean Empire who harbors some conservative political views and likes to tamper with the political landscape through back channels and scheming. Despite the fact that Dawson is your classic slippery politician type, there are times when I found myself rooting for him against his rivals despite the fact that I would, in any other situation, be more inclined to root for the other guy… such is Abraham’s skill in character writing.

The final – and, for my money, the most complex — POV character is Geder. Of all the characters, in The Dragon’s Path Geder traverses the most dramatic character arc. He seems like the guy I would normally root for; mainly because, at first blush, he’s very relatable. He’s a young lord attached to the Antean army that is marching to lay siege to Vanai (the same city Cithrin is forced to flee). However, unlike most gung-ho young bucks eager to make a name for themselves in the coming battle, Geder is an outcast. His peers openly mock and torment him, as he’s the kind of guy who’d rather read speculative essays than swing a sword around. Through a chain of events both at home and abroad, Geder’s star begins to rise. However, it is how he chooses to wield that power and the decisions the he makes along the way that make him a very challenging character to read. I’ve praised Abraham’s character writing skills earlier, but the fact that Abraham can pull off Geder’s character arc is nothing short of special.

Such fantastically written and engaging characters are almost always enough to carry me through just about any novel, but The Dragon’s Path possesses a few other weapons in its arsenal that make it special. First off, Abraham has populated his world with a bevy of human-like races that, while they aren’t extremely well explored in this opening volume, provide a nice level of intrigue that make me want to read on so I can delve more deeply into the people who populate this world, their lore and history. There are also a handful of supporting elements that make this book strong. Like most epic fantasy these days, there’s a fair amount of politics. While this element didn’t stand out as anything special, it wasn’t bad either, and added a gooey layer of intrigue and drama to the novel. There’s also a nice banking element that I actually really enjoyed. I feel like a lot of epic fantasy really avoids the whole economics factor, but not so here. I really got a good sense of how Abraham’s world works, and why the political situation is as it is because of this economic element. Money really does make the world go ‘round.

If there’s a weak point in The Dragon’s Path, it lies in the world building. One of the great pleasures when starting a new epic fantasy is gazing at the map and imagining what wonders the book holds. Though this book has a fairly grand scope, and one character goes on a rather epic map-spanning journey, I never really felt like I got a good feel for these disparate locations. One place sort of felt similar to the last, without giving me that feeling that the landscape and the scenery were actually changing.

Once all the reading was done, I was left with a bit of a “that’s it?” feeling. It’s hard to put my finger on exactly why I felt that way, but I think it might be because, compared to other epic fantasies of similar girth, not a ton happens in this one. It felt more like a long introduction… like Abraham’s goal was to introduce the major players, give the reader some solid footing in this world, and move the pieces into place for future events. It felt like an opening salvo. Now, that’s not a bad thing at all, don’t get me wrong: this is an entertaining and very well-written book. It just didn’t provide as much epic-ness as its peers. However, I left feeling like the seeds were planted and that I need only read on to see the results.

Overall, The Dragon’s Path is a good book, and it’s a strong opening chapter to what looks like it a very good fantasy series.

Also on CR: Interview with Daniel Abraham (2012); Reviews of Shadows & Betrayal, Seasons of War and The Dragon’s Path

The Dagger & the Coin Series: The Dragon’s Path, The King’s Blood (review next week), The Tyrant’s Law, The Widow’s House, The Spider’s War (March 2016)

One thought on “Guest Review: THE DRAGON’S PATH by Daniel Abraham (Orbit)”