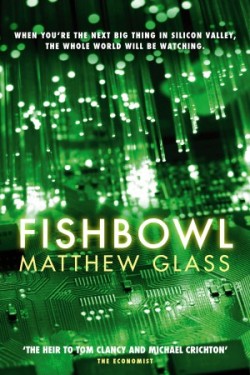 Matthew Glass is an author I’m very interested in reading. I have his first two novels, Ultimatum and End Game, but haven’t managed to get around to them yet. I spotted Fishbowl while browsing Atlantic Books’ latest catalogue, and I think it sounded very interesting. There are obvious connections with the story behind Facebook (see Ben Mezrich’s The Accidental Billionaires or the superb film adaptation, The Social Network), while Glass’s other works have brought to mind Kim Stanley-Robinson’s Science in the Capitol trilogy. Here’s the synopsis for the upcoming novel:

When you’re the next big thing in Silicon Valley, the whole world is watching.

As a gifted Ivy League student, Andrei Koss hit upon an idea that would revolutionise social networking and move it on by a generation. Enlisting the help of his best friends, Ben and Kevin, he turned their dorm room into an operations base, where fl ashes of creative brilliance and all-night-coding sessions led to the creation of Fishbowl. He is now the 21-year-old CEO of a multi-billion-dollar empire. His creation reaches into every corner of the planet. But its immense power has many uses, and some will stop at nothing to get a piece of it.

Matthew Glass (a pseudonym) Fishbowl is due to be published on February 5th, 2015 by Corvus in the UK.