Skip to content
HomeReview: THE SLOW REGARD OF SILENT THINGS by Patrick Rothfuss (DAW/Gollancz) 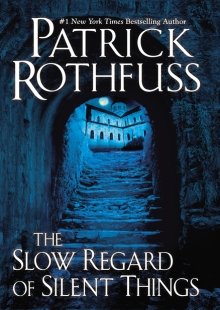 A novella set in the Kingkiller world

The University, a renowned bastion of knowledge, attracts the brightest minds to unravel the mysteries of enlightened sciences like artificing and alchemy. Yet deep below its bustling halls lies a complex and cavernous maze of abandoned rooms and ancient passageways – and in the heart of it all lives Auri.

Formerly a student at the University, now Auri spends her days tending the world around her. She has learned that some mysteries are best left settled and safe. No longer fooled by the sharp rationality so treasured by the University, Auri sees beyond the surface of things, into subtle dangers and hidden names.

I’m going to keep this review short. Ultimately, this novella did not work for me. I get what Rothfuss was trying to do — and not only because of the author’s introduction and notes after. While interesting, I really struggled to stay interested. 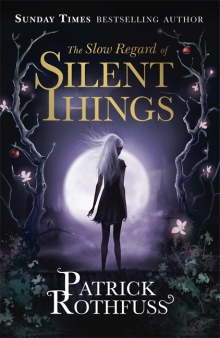 “It’s weird and wrong and tangled,” Rothfuss writes in the author’s note at the end. That’s pretty much how I feel about it, too. Although, unlike Rothfuss I don’t see it as a positive feature. The note feels very much like it’s trying to convince readers that the story they just finished reading really is good. There’s also an element of “how awesome and talented is Rothfuss?” That’s a sentiment I shared after reading The Name of the Wind and The Wise Man’s Fear, certainly. Rothfuss is clearly trying something new, here, which is certainly admirable. But, I don’t think it needed to be as long as it was. Maybe a couple of short-ish chapters — after a while, it just felt like he was belabouring ever point he was trying to make, and over-doing Auri’s character. Two, maybe three chapters in, I found out everything I needed to know about her quirky mindset. And then Rothfuss just kept telling us the same thing, illustrated in multiple ways. She’s interesting, yes, but the novella just ended up making her boring. I really hope he handles her part in the next novel better.

As for Rothfuss’s writing in this novella… Well, I think there are going to be many people who see it as “poetic” or “artful” and other such things. But for me, it looked over-done, filled with malapropisms (with words selected merely because of the way they sound or look, rather than any relevance to what came before), somewhat pretentious, and amateurish. I would never have expected him to write something like this.

This novella left me rather bored and feeling like I’d wasted a couple of hours when I could have been reading something else. Disappointing. Stick with the full-length novels.

The Slow Regard of Silent Things is out now, published in the US by DAW Books and in the UK by Gollancz.

3 thoughts on “Review: THE SLOW REGARD OF SILENT THINGS by Patrick Rothfuss (DAW/Gollancz)”