A few months ago I stumbled across a Twitter discussion that changed the way I look at my reading habits – both past and present. I have since forgotten who was involved, which is unfortunate because, like a good academic, I prefer to cite my sources. Essentially, ideas of “deep” and “shallow” reading in genre circles were tabled (without attaching any value judgements to either term). In this sense deep meant reading all the works and series of relatively few authors – typically favourites – and shallow referred to someone who reads single texts by a lot of different authors. This was something I hadn’t really thought about. I started asking those difficult questions – the kind we aim at ourselves. What kind of reader am I? What kind of reader have I been in the past?

As a teenager I was definitely a deep reader. I still have many battered paperbacks from this time, and can remember how pristine they were when I bought them from WHSmith. They have survived numerous house moves, university, and now have a place in my office. Great multi-part series like The Wheel of Time, the Riftwar and Serpentwar Sagas, the Farseer Trilogy, and the Drenai novels. I read anything I could find by Gemmel, Jordan, Hobb, etc. But for some reason I only read these, my favourite authors. Perhaps it was because I wasn’t the world’s fastest reader and these books are big. Or because I lacked the guidance, selection, and raw information that is now available for teen readers. Or more likely I lacked the imagination to look beyond WHSmith’s shelves to the bookshop round the corner. Regardless, I had a great time following the adventures of characters I came to know so well.

These days, I’m undoubtedly a shallow reader. Partly this is because my job requires me to read a wide variety of texts. Realist post-war fiction where nothing really happens? I can just imagine my spotty and be-fringed fourteen year-old self rolling his eyes at having to read such a book. But even when reading within the genres I love so much I find I am no longer reading large series.

I’ve enjoyed books such as The Passage by Justin Cronin, James Smythe’s The Explorer, and Feed by Mira Grant. But all of them have sequels that I haven’t managed to read. I could make excuses – slow reader, job, etc. – but if I’m being honest I don’t think I read that way anymore. My natural preference is to explore new ideas, styles, and characters with each text and I’d rather do that in unfamiliar hands. Whereas before I looked for that continuity, that guaranteed experience, I now seek out difference.

For me, this shift has occurred as I have grown older. I’m certainly not suggesting this is a trend – I know plenty of people of all ages who could be called either deep or shallow readers. And it leaves me wondering if I will change my habits again in the coming years.

This realisation, and admission, comes at a slightly awkward time as I anticipate the publication of my own sequel, Your Servants and Your People (which I can now guarantee won’t be read by any of the above named authors). Of course, I live in hope that the millions of deep readers out there will flock to the second of my post-apocalyptic zombie-westerns. But timing aside, this awareness of my reading habits has been really helpful in the writing of The Walkin’ Trilogy. Or, more specifically, in understanding why I chose to write them in the way I did.

Seven years have passed from the end of Your Brother’s Blood and the beginning of Your Servants and Your People. For some characters, such as Mary McDermott, this has meant huge changes in her life. She has gone from a plucky, fearless thirteen year-old to a disillusioned young woman. For her father, a Walkin’, the time has left him unchanged – almost. There are plenty of new characters, too, but this gap means there is quite a different feel between the two books. And quite a different McDermott family. They have felt very different to write. I like this. It makes me think perhaps I’ve managed to satisfy both the readers I have been; that there’s enough continuity for my teenage, deep reading self, and enough difference and unfamiliarity for my current shallow reading preference.

Maybe Twitter will come up with a snappy term for that.

David Towsey’s Your Servants and Your People will be published by Jo Fletcher Books on November 6th, 2014. 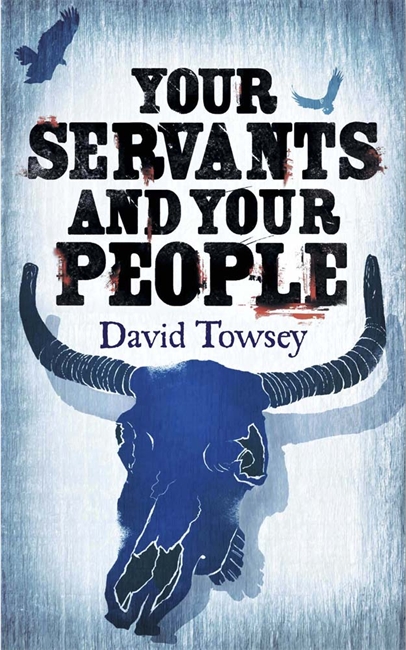