Lessons from the city-state of Los Angeles

America is obsessed with Los Angeles. And America has been thinking about Los Angeles all wrong, for decades, on repeat. Los Angeles is not just the place where the American dream hits the Pacific. (It has its own dreams.) Not just the vanishing point of America’s western drive. (It has its own compass.) Functionally, aesthetically, mythologically, even technologically, an independent territory, defined less by distinct borders than by an aura of autonomy and a sense of unfurling destiny — this is the city-state of Los Angeles.

Deeply reported and researched, provocatively argued, and eloquently written, Rosecrans Baldwin’s Everything Now approaches the metropolis from unexpected angles, nimbly interleaving his own voice with a chorus of others, from canonical L.A. literature to everyday citizens. Here, Octavia E. Butler and Joan Didion are in conversation with activists and astronauts, vampires and veterans. Baldwin records the stories of countless Angelenos, discovering people both upended and reborn: by disasters natural and economic, following gospels of wealth or self-help or personal destiny. The result is a story of a kaleidoscopic, vibrant nation unto itself — vastly more than its many, many parts.

Baldwin’s concept of the city-state allows us, finally, to grasp a place — Los Angeles — whose idiosyncrasies both magnify those of America, and are so fully its own. Here, space and time don’t quite work the same as they do elsewhere, and contradictions are as stark as southern California’s natural environment. Perhaps no better place exists to watch the United States’s past, and its possible futures, play themselves out.

It’s not just America that’s obsessed with Los Angeles. I’ve long been fascinated by the city (even though I’m not sure I’d like to live there). It’s one of my favourite fiction locations, and its diverse and fragmented nature allows for incredible variation in the novels, TV series and movies set within it. In Everything Now, Baldwin does a very good job of showing us the city from a number of different angles — some familiar, some new, all interesting. An interesting and engaging journey through various facets of Los Angeles, I enjoyed this. END_OF_DOCUMENT_TOKEN_TO_BE_REPLACED 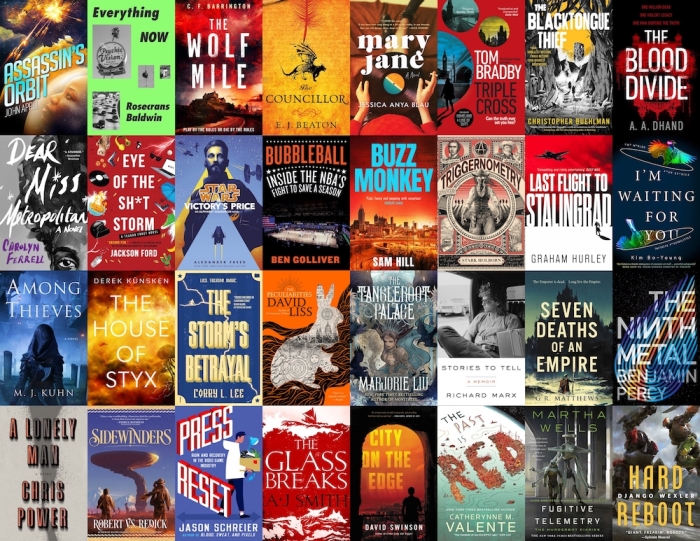 END_OF_DOCUMENT_TOKEN_TO_BE_REPLACED

Like a lot of people who don’t live there, I am fascinated by Los Angeles. It’s a city I’ve visited only three times, but each time it captured my imagination. My favourite crime series is set there (Connelly’s Bosch), many other favourite novels are set in or around Los Angeles, and I’m also fascinated by the workings and behind-the-scenes of Hollywood. I have not, however, read much general history or non-fiction about the city and/or region. This summer, there are a couple of books that have caught my attention. The first is Everything Now by Rosecrans Baldwin. Here’s the synopsis:

A provocative, exhilaratingly new understanding of America’s most confounding metropolis — not just a great city, but a full-blown modern city-state

America is obsessed with Los Angeles. And America has been thinking about Los Angeles all wrong, for decades, on repeat. Los Angeles is not just the place where the American dream hits the Pacific. Not just the end of the line anymore. Not just the vanishing point of America’s western drive. Not just a city.

Los Angeles is best understood as a city-state. Functionally, aesthetically, mythologically, even technologically — a small independent territory, a sovereign place, a city and surrounding regions bound together by population density and an aura of autonomy and a sense of unfurling destiny. This is Los Angeles.

Deeply researched and reported, provocatively argued, and eloquently sung, Rosecrans Baldwin’s Everything Now reveals the borders and probes the ecology of this Great American City-State, enumerates its cultural treasures and economic prowess, hails its heroes and charts its landmarks, plumbs its social and economic history, catalogs its canonical literature (from John Fante to Joan Didion to Mike Davis to Octavia Butler), probes its religions and spiritual practices, its languages and cuisines, and seeks the keys to its future. It is a protean, vibrant place — vastly more than its many, many parts.

Rosecrans Baldwin’s Everything Now is due to be published by MCD in North America and in the UK, on June 15th, 2021.