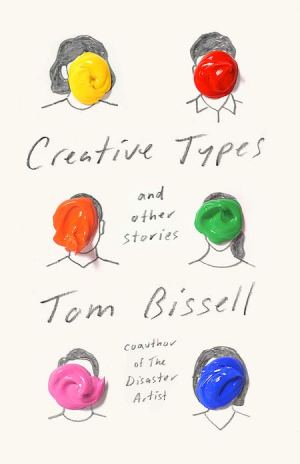 In these and other stories, Tom Bissell vividly renders the complex worlds of characters on the brink of artistic and personal crises — writers, video-game developers, actors, and other creative types who see things slightly differently from the rest of us. With its surreal, poignant, and sometimes squirm-inducing stories, Creative Types is a brilliant new offering from one the most versatile and talented writers working in America today.

I’d only read Bissell’s non-fiction before I gave Creative Types and Other Stories a try — specifically, The Disaster Artist and Magic Hours. With hindsight, the latter should have given me an idea of what to expect from this very good collection of stories (there’s some subject overlap). Each story is a snapshot in a character’s life, as they are forced to confront their current situations and question what they want, and even who they are. END_OF_DOCUMENT_TOKEN_TO_BE_REPLACED

Sergio de la Pava‘s prize-winning A Naked Singularity is one of those novels I purchased quite some time ago, but keep forgetting I have on my Kindle. I recently found out about his upcoming book, Lost Empress, which sounds really interesting. If potentially weird. Described as “a shockingly hilarious novel that tackles, with equal aplomb, both America’s most popular sport and its criminal justice system”, it sounds pretty ambitious. If the author pulls it off, it could also be amazing. Here’s the synopsis:

From Paterson, New Jersey, to Rikers Island to the streets of New York City, Sergio de la Pava’s Lost Empress introduces readers to a cast of characters unlike any other in modern fiction: dreamers and exiles, immigrants and night-shift workers, a lonely pastor and others on the fringes of society — each with their own impact on the fragile universe they navigate.

Nina Gill, daughter of the aging owner of the Dallas Cowboys, was instrumental in building her father’s dynasty. So it’s a shock when her brother inherits the franchise and she is left with the Paterson Pork, New Jersey’s failing Indoor Football League team. Nina vows to take on the NFL and make the Paterson Pork pigskin kings of America. All she needs to do is recruit the coach, the players, and the fans.

Meanwhile, Nuno DeAngeles — a brilliant and lethal criminal mastermind — has been imprisoned on Rikers Island for a sensational offense. Nuno fights for his liberty — while simultaneously planning an even more audacious crime.

In Lost Empress, de la Pava weaves a narrative that encompasses Salvador Dalí, Joni Mitchell, psychiatric help, emergency medicine, religion, theoretical physics, and everything in between. With grace, humor, and razor-sharp prose, all these threads combine, counting down to an epic and extraordinary conclusion.

Lost Empress is due to be published in North America by Pantheon and in the UK by MacLehose Press, on May 8th, 2018. (The UK cover, top right, is much better than the US cover…)

I have long been a fan of James Fallows‘s journalism — I first read his work in The Atlantic, back in 2007 when he was still living in China (some of his articles from that time have been collected in the excellent Postcards From Tomorrow Square, which I’m reading at the moment). This year, Pantheon will publish Fallows’s latest book, co-written with his wife, Deborah Fallows, Our Towns. Here’s the synopsis:

A vivid, surprising portrait of the civic and economic reinvention taking place in America, town by town and generally out of view of the national media. A realistically positive and provocative view of the country between its coasts.

For the last five years, James and Deborah Fallows have been traveling across America in a single-engine prop airplane. Visiting dozens of towns, they have met hundreds of civic leaders, workers, immigrants, educators, environmentalists, artists, public servants, librarians, business people, city planners, students, and entrepreneurs to take the pulse and understand the prospects of places that usually draw notice only after a disaster or during a political campaign.

The America they saw is acutely conscious of its problems — from economic dislocation to the opioid scourge — but itis also crafting solutions, with a practical-minded determination at dramatic odds with the bitter paralysis of national politics. At times of dysfunction on a national level, reform possibilities have often arisen from the local level. The Fallowses describe America in the middle of one of these creative waves. Their view of the country is as complex and contradictory as America itself, but it also reflects the energy, the generosity and compassion, the dreams, and the determination of many who are in the midst of making things better. Our Towns is the story of their journey — and an account of a country busy remaking itself.

I received an ARC of this book recently, and I’m really looking forward to reading it. (I’ll probably start it either after finishing Postcards…, or after my next non-fiction read.)