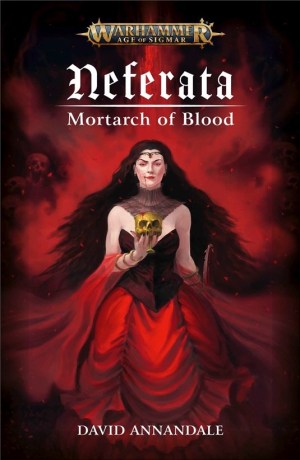 Neferata, queen of the vampires, shows her true colours…

When a threat to her realm of Nulahmia rises, the Mortarch Neferata must commit herself to a centuries-long battle if she is to save her kingdom and retain her position.

The Realm of Death convulses with the ravages of war, but Neferata continues to rule the city of Nulahmia with an iron will. Through guile and terror, she has destroyed all who would take her crown. But when a threat rises whose repercussions will stretch across the ages, Neferata must commit herself to a centuries-long battle and retain what is hers, no matter the cost.

This is the first full-length novel dedicated to the queen of vampires in the Age of Sigmar. Her origin story was first written about in Josh Reynolds’s novel, set before the history of the Old World, and also a bit in Mike Lee’s Nagash trilogy. Reynolds also wrote a short story featuring the character, Auction of Blood, which was an intriguing introduction to the character’s obsession with secrecy and scheming, always off-stage as others did her bidding. In Mortarch of Blood, Annandale gives us a much clearer picture of Neferata herself. She is presented as never before. END_OF_DOCUMENT_TOKEN_TO_BE_REPLACED

A couple more Warhammer Undead novels in the pipeline from Josh Reynolds: Neferata and Master of Death.

Ok, so Neferata is actually already available (in paperback and eBook), but Black Library seem to be re-releasing their Warhammer Legends series with new (and, frankly, better) covers. Here’s the synopsis for Neferata:

The vampire queen Neferata plots to create a new empire.

Neferata is a queen without a kingdom. Lahmia has fallen, her vampire children have scattered and she is reduced to draining blood from the beasts of the mountains. After a chance encounter with a party of dwarfs, she sets her sights on a capital for her new empire – the stronghold of Silver Pinnacle. She calls her allies to battle – but can she truly trust Ushoran, Lord of Masks, and his bestial Strigoi vampires?

Next up is Master of Death, the follow-up novel (which has not been available before)…

An ancient follower of the Great Necromancer seeks power over death itself.

W’soran, one of the first vampires and former pupil of the Great Necromancer Nagash, plots to unravel the secrets of life and death. But his hunt for power is interrupted by a civil war in Mourkain, the mountain nation ruled by his former ally, Ushoran. Now W’soran must battle old friends and new enemies as he weaves a complex web of treachery and deceit in order to anoint himself the Master of Death…

Master of Death is also due to be published in January 2014.

I haven’t had a chance to read Neferata, yet, but after reading Master of Mourkain, a short story by Reynolds, my appetite was certainly whet for more of his Undead fiction.