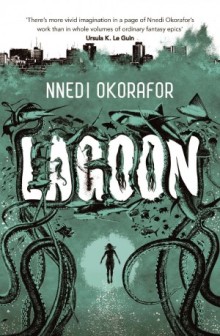 A gripping, beautifully-written science fiction novel set in and around Lagos.

The world will never be the same.

Three strangers, each isolated by his or her own problems: Adaora, the marine biologist. Anthony, the rapper famous throughout Africa. Agu, the troubled soldier. Wandering Bar Beach in Lagos, Nigeria’s legendary mega-city, they’re more alone than they’ve ever been before.

But when something like a meteorite plunges into the ocean and a tidal wave overcomes them, these three people will find themselves bound together in ways they could never imagine. Together with Ayodele, a visitor from beyond the stars, they must race through Lagos and against time itself in order to save the city, the world… and themselves.

This is the first novel I’ve read by Nnedi Okorafor, and it won’t be my last. I started reading it on the first day it arrived in the mail – I was putting it on my TBR shelf, and flipped it open at the first page. Thirty minutes later, I was still reading and had sidelined my then-current read. Lagoon is beautifully and intelligently written, addictive, well-paced and a must read. END_OF_DOCUMENT_TOKEN_TO_BE_REPLACED