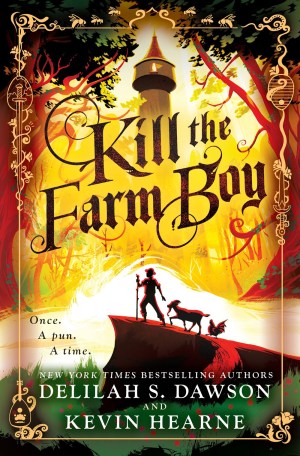 So, this novel may have my favourite fantasy title ever. I can’t actually think of one that amused me as much before — although, Magic Kingdom For Sale, Sold and many Pratchett titles have been favourites for a long while. I hadn’t heard about Kill the Farm Boy until a few moments ago, when B&N Sci-Fi & Fantasy Tweeted about it. Written by Delilah S. Dawson and Kevin Hearne, here’s the synopsis:

Once upon a time, in a faraway kingdom, a hero, the Chosen One, was born… and so begins every fairy tale ever told.

This is not that fairy tale.

There is a Chosen One, but he is unlike any One who has ever been Chosened.

And there is a faraway kingdom, but you have never been to a magical world quite like the land of Pell.

There, a plucky farm boy will find more than he’s bargained for on his quest to awaken the sleeping princess in her cursed tower. First there’s the Dark Lord who wishes for the boy’s untimely death… and also very fine cheese. Then there’s a bard without a song in her heart but with a very adorable and fuzzy tail, an assassin who fears not the night but is terrified of chickens, and a mighty fighter more frightened of her sword than of her chain-mail bikini. This journey will lead to sinister umlauts, a trash-talking goat, the Dread Necromancer Steve, and a strange and wondrous journey to the most peculiar “happily ever after” that ever once-upon-a-timed.

Kill the Farm Boy is due to be published by Del Rey in North America, in July 2018. (At the time of writing this, I couldn’t find any information about a UK release.)