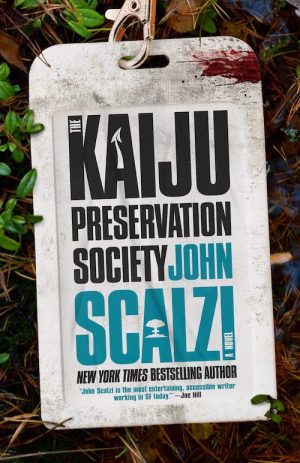 John Scalzi has a new standalone novel coming out this spring! And it’s one that sounds like a lot of fun: The Kaiju Preservation Society. I’ve been lucky enough to get a DRC, so I’ll hopefully be reading it very soon. The novel will be published by Tor Books in North America and in the UK, with two quite different covers — while I like both, the UK cover (below) is quite striking. Here’s the synopsis:

When COVID-19 sweeps through New York City, Jamie Gray is stuck as a dead-end driver for food delivery apps. That is, until Jamie makes a delivery to an old acquaintance, Tom, who works at what he calls “an animal rights organization.” Tom’s team needs a last-minute grunt to handle things on their next field visit. Jamie, eager to do anything, immediately signs on. 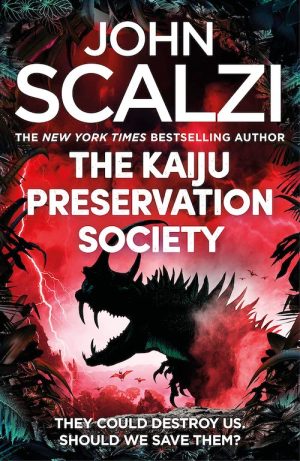 What Tom doesn’t tell Jamie is that the animals his team cares for are not here on Earth. Not our Earth, at at least. In an alternate dimension, massive dinosaur-like creatures named Kaiju roam a warm and human-free world. They’re the universe’s largest and most dangerous panda and they’re in trouble.

It’s not just the Kaiju Preservation Society whose found their way to the alternate world. Others have, too. And their carelessness could cause millions back on our Earth to die.

The Kaiju Preservation Society is due to be published by Tor Books in North America (March 15th) and in the UK (March 17th).