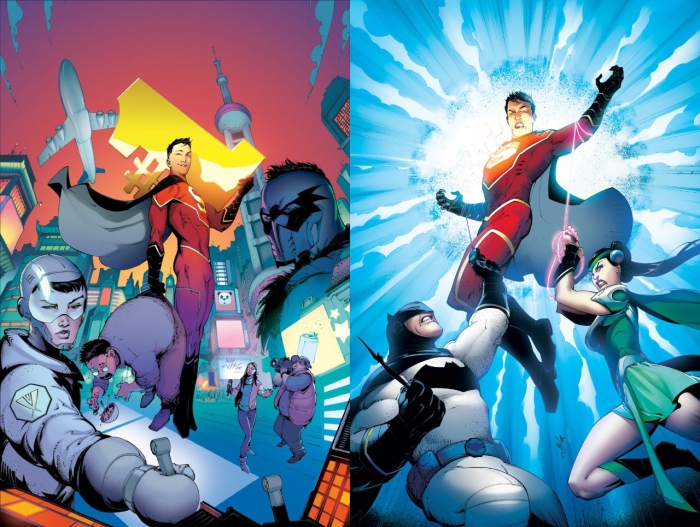 I haven’t been reading much coverage of DC Comics’ upcoming “Rebirth”, but I just stumbled across this title: New Super-Man. From the synopsis, it would appear that DC are aiming to crack the (no-doubt) growing Chinese comics market. Or just to capitalize on the growing awareness of China in contemporary society/politics/economics. The first story-arc, “Made in China” takes the DC universe in a potentially interesting direction — a new, “Justice League of China”…

“Made in China” Chapter One.

An impulsive act of heroism thrusts an arrogant young man into the limelight of Shanghai as China begins to form its own Justice League of powerful heroes. Rising from the ashes of The Final Days of Superman, award-winning writer Gene Luen Yang and on-the-rise art star Victor Bogdanovic introduce readers to Kong Kenan — the New Super-Man! When the world needed a new hero, China made him!

As someone who has studied China and Chinese history and politics for over a decade, this could be a really interesting title. Also, the fact that China made their own Super-Man is amusing — given the long history of Chinese manufacturers’ tendency to replicate Western creations (just as each new rising power has done, throughout history), this seems entirely apt.

New Super-Man #1 is due to be published on July 13th, #2 on August 10th. Here’s the synopsis for the second issue:

“Made in China” Chapter Two.

The New Super-Man must face off against the Justice League of China? When Kenan Kong was imbued with the powers of Superman, he didn’t waste any time using them! Now it’s up to the New Bat-Man and New Wonder-Woman of his home country to bring our hero back down to earth-just in time to stop the attack of the deadly Sunbeam!