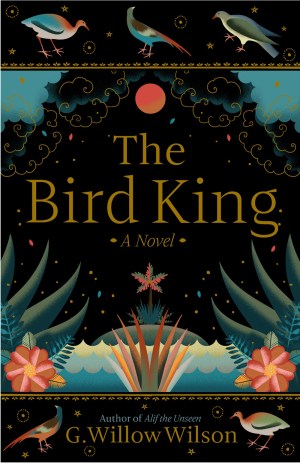 G. Willow Wilson is the author of the critically-acclaimed, award-winning Alif the Unseen (an NPR and Washington Post Best Book of the Year) and the critically-acclaimed Ms. Marvel comic series. I’ve long been a fan of her work, and her next novel has really caught my attention. The Bird King is described as “a fantastical journey set at the height of the Spanish Inquisition” and “a jubilant story of love versus power, religion versus faith, and freedom versus safety”, here’s the official synopsis:

Set in 1491 during the reign of the last sultanate in the Iberian peninsula, The Bird King is the story of Fatima, the only remaining Circassian concubine to the sultan, and her dearest friend Hassan, the palace mapmaker. Hassan has a secret — he can make maps of places he’s never seen and bend the shape of reality with his pen and paper. His magical gift has proven useful to the sultan’s armies in wartime and entertained a bored Fatima who has never stepped foot outside the palace walls.

When a party representing the newly formed Spanish monarchy arrives to negotiate the terms of the sultan’s surrender, Fatima befriends one of the women, little realizing that her new friend Luz represents the Inquisition, and will see Hassan’s gift as sorcery, and a threat to Christian Spanish rule. With everything on the line, what will Fatima risk to save Hassan, and taste the freedom she has never known?

Fatima and Hassan traverse Iberia to the port, helped along the way by a jinn who has taken a liking to them — Vikram the Vampire, who readers may remember from Alif the Unseen. Pursued all the while by Luz, who somehow always seems to know where they will end up, they narrowly escape from her generals by commandeering a ship, and accidentally also the snoozing Breton monk belowdecks. Though they are unsure whether to trust him, because he is a member of the very same faith they are running from, they nevertheless set about learning from him how to crew a ship. And as it becomes clearer both that there is no place on the mainland that they will be safe, and that the three of them are destined to stay together, they set out to do something they never thought possible — to find the mysterious, possibly mythic island of The Bird King, whose shifting boundaries will hopefully keep them safe.

An epic adventure to find safety in a mythical realm, The Bird King challenges us to consider what true love is and the price of freedom at a time when the West and the Muslim world were not yet separate.

Spotted this on ComiXology’s “Pre-Order” page, and just really liked the cover. While the series sounds great, I haven’t read any, yet (waiting for the collections). It’s been getting rave reviews across the board, though.

The cover is by Adrian Alphona, and the series is written by G. Willow Wilson. Ms. Marvel #5 will be published on June 25th, 2014. Here’s the synopsis:

How does a young girl from Jersey City become the next biggest super hero? Kamala has no idea either. But she’s comin’ for you, New York.