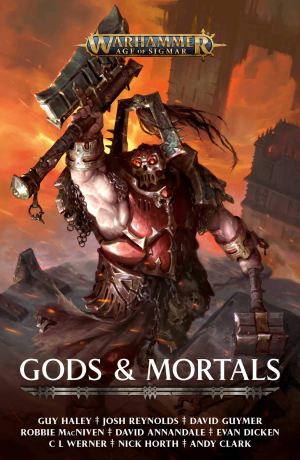 An anthology of Age of Sigmar short fiction, which serves very well as an introduction

For too long, the Mortal Realms have suffered under Chaos’ twisted crusade. Tainted lands writhe in agony and once great cities lie in ruins, the hopes of their people extinguished. But the storm winds rise. Sigmar’s greatest creation, the Stormcast Eternals, strike with His vengeance. Their lightning drives the darkness away and their thunder drowns out the screams of the Foul Gods’ acolytes as they fall to sword and halberd. The sons and daughters of the storm know they cannot fail. For now is the time where the fate of a world will be decided. Where Gods and mortals must rise and fight, or face their final damnation.

The Age of Sigmar is a pretty massive fantasy setting, one that continues to grow. It could be a bit daunting to find a way into it. If you are looking for a way in, this is a substantial collection of short fiction may be your best bet. Including stories featuring some established characters, as well as touching upon many of the myriad facets of the Mortal Realms, reading Gods & Mortals will give readers a nice, broad glimpse of the Age of Sigmar. END_OF_DOCUMENT_TOKEN_TO_BE_REPLACED