Skip to content
HomeQuick Review: A SECRET ABOUT A SECRET by Peter Spiegelman (Knopf) 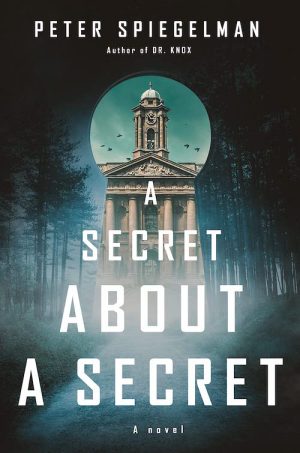 A murder at a secluded research institute unveils decades of secrets

Looming high above the cliffside along a remote coastline, Ondstrand House is the headquarters of the shadowy biotech firm Ondstrand Biologic. When the body of the organization’s most gifted young scientist, Allegra Stans, is discovered in a walk-in refrigerator — her neck has been broken — Agent Myles is called in to investigate. Myles works for Standard Division, the most feared element of a vast state security apparatus, and he’s been dispatched to the brooding manor, a massive stone campus that once housed a notorious boarding school, to do what Standard Division agents do best — complete the task at hand.

As his investigation proceeds, Myles discovers that “gifted scientist” is only one thread in the complicated fabric of Allegra’s life. There are darker strands as well — of ambition, manipulation, and bitter grievance — all woven into a pattern of secrets, each presenting a reasonable motive for murder. It appears everyone has something to hide, including Allegra’s colleagues, lovers, and former lovers — even the very halls of Ondstrand House itself.

Questions continue to pile up: What interest does Standard Division, an organization best known for intelligence gathering and clandestine international operations, have in this seemingly straightforward case? Could the killing have anything to do with the sprawling estate’s sordid past? And what, exactly, is this research facility researching? Before long, another murder is discovered, and Myles finds himself an increasingly unwelcome presence in an ever more hostile landscape with few allies and fewer answers.

Peter Spiegelman’s Dr. Knox was one of my favourite reads of 2016, and I’ve been eagerly anticipating his new novel ever since it was announced. A Secret About a Secret is another satisfying read, one that offers a different take on the crime/mystery genre than did the aforementioned Dr. Knox. I very much enjoyed this.

A Secret About a Secret opens with the arrival at Ondstrand Biologic of one Agent Myles. An investigator for the Standard Division (an imaginary police institute in this unnamed country), he has been asked to investigate the mysterious death of a young researcher at the scientific institute. To begin with, it looks like it might end up being a rather standard murder investigation: perhaps she was killed by a jilted lover? But who was involved, and why does everyone seem to be either dissembling, obfuscating, or outright lying to Myles? As our protagonist digs deeper into the lives of the Ondstrand employees (who live on the campus for most of their time), he uncovers a web of lies and secrets dating back decades. Not all are connected to the murder, but when there are this many secrets, it’s almost inevitable that misunderstanding, suspicion, and jealousy will escalate to a deadly degree.

I very much enjoyed the pacing of the novel. Spiegelman’s in no hurry to solve the mystery for the reader, but nor does it ever feel like we’re treading water or being led in circles (by the author, at any rate: some characters would be all too happy to do that to us and Myles). While Dr. Knox wasn’t a fast-paced thriller, it was notable to me that A Secret About a Secret does a good job of displaying the author’s versatility within the genre. The two novels are quite different in many ways, but each is equally engaging and absorbing.

The novel shows that Spiegelman is particularly adept at evoking a sense of place. The windswept, coastal location of the Ondstrand campus is well-written, and readers won’t have any difficulty in picturing how such a place can make its residents feel isolated, and what other affects this might have had on the company’s hyper-driven employees. For me, I was put in mind of the blue-grey hue of the Scottish highlands mixed with Scandinavian autumn colours. Or perhaps a location as photographed by Annie Leibovitz.

Spiegelman does a good job of not making the specific location of the novel an issue. The author appears to have drawn from a pretty broad European palette to create this country: some Scotland, some Germany, some hints of Scandinavian influence (not just the geography). It was an interesting choice, but I think Spiegelman does a great job of creating a believable setting, but with an unusually powerful detective service. Of course, like many powerful political institutions, it is not without its own agenda, secrets, and inter-governmental rivalries.

Overall, then, this is another excellent novel from Spiegelman. Finishing this novel left me wanting to read more by the author, and I can only hope that the gap between this and his next novel is not as long as between Dr. Knox and A Secret About a Secret. If you’ve not tried his work, yet, then this is as good a place to start as any other (Dr. Knox and Thick as Thieves would also suit). If you are a fan of his work already, then rest assured that A Secret About a Secret is another excellent mystery. Definitely recommended.

Peter Spiegelman’s A Secret About a Secret is out now, published by Knopf in North America.