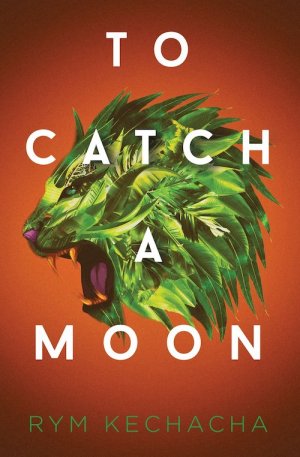 Today, we have an annotated excerpt from Rym Kechacha‘s latest novel, To Catch A Moon. Due to be published by Unsung Stories this week, here’s the synopsis:

Mexico City, 1955. The painter Remedios Varo sits in her kitchen with her friend, the artist Leonora Carrington. Together they let their imaginations soar beyond their canvases to create new worlds.

In the surreal landscape of her imagination, Varo’s creations take on a life and power of their own. A wheeled spirit of the earth kidnaps a baby star; a woman who is half owl draws herself a daughter; a juggler entrances a crowd of grey-cloaked men, a lion and a goat. The rules that govern this world bend and creak, old alliances break, and an impending apocalypse forges the most unlikely of friendships.

Rym Kechacha (Dark River, British Fantasy Awards finalist 2021) spins a wild fantasy from Varo’s dreamlike imaginings, a world in which the moon’s daughter holds the key to mankind’s fate. Populated by witches, sentient animals, and a lion made of leaves, To Catch a Moon is a bold and fearless ode to the power of Remedios Varo’s timeless paintings.

Now, over to the author…!

To Catch a Moon is based on the paintings of the Spanish Surrealist artist Remedios Varo. She left France in 1940 as a refugee and spent the rest of her life in Mexico. Her work has inspired me ever since I first saw it; intricate and precise, following a strange kind of dream-logic that somehow seems beautifully familiar. My novel takes some of her paintings and weaves a fantasy narrative from them, featuring owl-women, witches, jugglers and a lion made of leaves.

And the Earth spirits shall find human girls on the cusp of menarche and bring them to the Tower. They shall be girls with hair the colour of flax who have no living relations. Six shall make the day and six shall make the night and they will live in the Tower with all their bodily needs fulfilled until such time as they stoop a little in the shoulder and squint a bit about the eye. Then they will be sent out to the world with as many coral rings as moons they have served and they will be honoured in their villages and live long and happy lives, and for as long as they live they will not speak a word of the Tower or the Earth spirits or what they have sewn to a single living soul.

This extract is from near the beginning of the novel. It begins, like all the chapters, with a part of the contract that Remedios Varo writes to create the world we’re about to dive into. The Surrealist artists were really committed to play and exploration of the unconscious and Remedios Varo spent a lot of time researching the occult, playing drawing games and coming up with practical jokes. It’s one of the things I find so inspiring about her, that her artistic practice contained all this ephemera that wasn’t directly ‘productive’. She was just creating for the sake of it, and the contract To Catch a Moon is based on is something I have imagined she might have made, just for fun.

Here are the labra trees, stitched in a thread that sparkles green and gold when they raise their needles. Here are the flecks of grey foam, frothing on the waves as the wind drags them into a curl. Here are the sloping slate roofs, perfect cones and pyramids balanced atop the boxes of houses. Keep the hand steady, don’t let the fingers slip. Not a stitch too many, nor a snip too few. Mandoré calls out the patterns from his book and stirs the urn with his great silvery staff and they’d better keep up; let their fingers fly across the silken folds of the world they’re making. If they let it slip by unmade they’ll feel the sting of that staff across their backs.

This first paragraph is describing the painting Embroidering the Earth’s Mantle, which is a really important image in the book. It’s the beginning of introducing the reader to some of the odd metaphysics of this world; everything in creation is written in a book, read in a room at the top of a tower and stitched onto a strange silk to become the world.

The six girls sit at the top of the Tower, bent over their work with their spines curved, the golden hairs on the napes of their necks settled over their collars. Alissa sits by the biggest window, pushing her needle through the silk over and over again as the night progresses. She doesn’t look through the glass towards the Outside, for snatched glances of what might be out there earns you a whack on the wrist. Instead, she keeps her eyes on the silk as it tumbles over her lap and under the windowpane. She sews fields of golden wheat, dark patches of bramble in the hedgerows and bracken in the forests, and she does it all in the heavy silence that squats on the Tower, only broken by Mandoré’s voice. So still is the air between the girls that her ears become as sharp as an owl’s. Here is the scratch of needle tips on silk, here is the soft breathing of the other five girls who sew with her, here is the creak of her nails growing from her fingertips.

‘Here is…’ is a refrain throughout the book. I wanted a way to signpost the visual element of the book, to bring a certain playful awareness back to the reader that despite the metaphysics of creation in the book, the situations really come from visual images. I also enjoyed the sing-song syntax of it — how words sound is quite important to me and I think about it a lot when I’m writing and re-writing.

The girls who embroider the world are allowed only the faintest of sounds to prove they are still alive, but the world outside the Tower goes on with the noises they have sewn into it. Crack rumble goes the thunder in the night. Whistle squeak goes the wind in the eaves. And hiss spit go the words of the world as they bubble and broil in the urn, condensing into a thin thread of light. Alissa draws her needle towards the table and pricks the silk. She sews the trees and the waves and the roofs. She embroiders the world with thread spun from Mandoré’s words as the silk of creation spins beneath her.

I always try to make my writing as multi-sensory as possible. Maybe it can be too much at times, but I love that when I’m reading so I make a big effort in my own work.

‘The boat with the seven sails shall list to starboard as it docks,’ Mandoré intones, clutching the heavy book he reads from with one gloved hand and stirring the glowing urn with his staff in the other.

‘And the seagull shall keen as it soars away from the shore. The path from Stritina is repaired with bricks from the new kiln.’

Six sets of fingers busy themselves with tiny stitches, and after a breath the words he called into the thick silence of the Tower appear on the silk and flow out into the world.

Here is a boat with a stiff white sail, bearing treasures from the city. Here is a seagull screeching as he rides the hot air over the lakes. Here is a road made of tessellating bricks, each one a block of stitches smaller than a speck of dust. Alissa stitches it all in tandem with the other girls, sewing the word thread with her fingers moving faster than wind; never dropping her needle, never thinking about the fabric of the world once it has passed through her hands, never disobeying nor questioning the voice that makes the world.

I think it’s often a challenge to introduce main characters, such as Alissa will prove to be. You want to orient a reader but intrigue them too and so you have to be careful with information. Too much and it’s boring, too little and it’s confusing. I think assuming your reader is as clever or cleverer than you is good writing advice, so maybe I tend to err on the side of too little information.

Sometimes, as she sews, Alissa can let a part of her mind detach from Mandoré’s drone and make her fingers fly over the silk, while her real self, the part of her that is more than just a sewing girl trapped in a tower, can drift to a place where she lives inside the world she sews onto the silk. Last night, she imagined that she lived in a cottage by a river with a watermill, and she helped her mother, the miller, clean the slimy weeds from the blades that sliced through the water. She has never seen a watermill other than those she has embroidered, but now she thinks she would rather live there than in a barge drifting along a canal, which was last night’s fantasy home.

But here is a sound that starts quieter than Mandoré’s droning voice and then grows loud. It cuts into Alissa’s calm and drags her attention towards it, the sound ringing in her ears. She lets her needle pause, stills her body so she might hear it better. It comes again, there, just under Mandoré’s patterns. The sweet lilt of music, a snatch of flute or pipe that trills a few notes of a song and then stops. Like a wren warbling before the rain falls. It lasts no more than a second, it is just a momentary falter in the usual hush of the tower, but it snares her completely. She lets her eyes slide off the silk. She longs to turn around, to see who or what played the music that entranced her so, but she dares not show Mandoré that she is no longer looking to the silk falling across her lap. She wonders if the others have heard it; glances quickly to her right, but the girl who sits next to her still pushes her needle through the silk as if there is nothing out of the ordinary. Perhaps there is not. Perhaps Alissa’s imagination is tricking her.

This is the ‘inciting incident’ of the book, or one of them anyway. It comes early on, before we really understand what’s going on, but hopefully a reader is following what’s happening and going with it. The idea of the music is taken straight from the painting this scene is based on, where there’s a mysterious half-masked figure playing a flute or pipe. This turns out to be a very important character in the book, and that’s how I built the novel; painting to painting, character to character, making them interact in unexpected ways that nevertheless makes sense in terms of the plot that emerged.

Rym Kechacha’s To Catch a Moon is due to be published by Unsung Stories in the UK, on May 26th.