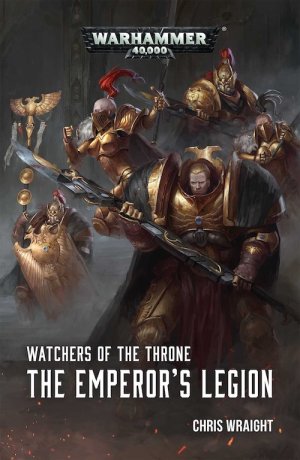 Politics on Terra as the galaxy burns

The Adeptus Custodes are the Emperor’s praetorian guard, the defenders of Terra and watchers over the Golden Throne. But when a threat arises, they and their Sisters of Silence allies may find themselves pressed almost beyond endurance…

The Custodian Guard have stood watch over the Emperor’s Palace on Terra since the foundation of the Imperium. Charged with protecting the Master of Mankind from all threats, within and without, their fearsome resolve is renowned throughout the galaxy, and their golden armour is the last thing that a would-be assassin or saboteur will ever see. Alongside the Null-maidens of the Sisters of Silence, who are anathema to psykers and sorcerers alike, there is no threat to the Golden Throne that they alone cannot vanquish… until now.

The Emperor’s Legion is a novel that takes a look at the politics of the Imperium, and the ways in which recent events in the larger WH40k meta-story have changed… well, almost everything. While it has plenty of action, it felt quite different to many other Black Library novels. An interesting and illuminating shift in focus and perspective, I really enjoyed this.

The Emperor’s Legion is set during the events that saw the galaxy split in half: Abaddon succeeds in destroying Cadia, and the Cicatrix Malediction opens. Chaos appears ascendant, the Imperium is thrown into… well, chaos, and the rulers of humanity must decide how to proceed. Oh, and a daemon horde attacks the throneworld. So, you know, things are getting tense.

The novel is split between three perspectives: Valerian, a member of the Adeptus Custodes; Tanau Aleya, a Sister of Silence (an “anathema psykana… a null-maiden”, with minimal respect for the leaders of humanity); and Alexei Lev Tieron, chancellor of the Council of High Lords. Each offers a different take on the events in the run up to and after the fall of Cadia, and Wraight gives us a taste of the factions, agendas, and struggles at play on Terra. Through Valerian’s eyes, we learn a lot about the Custodians (see below). Aleya re-introduces readers to the Sisters of Silence (a term she finds absurd, one that could only have come from the “idiots” among the High Lords), and how their role in the Imperium has changed since the Horus Heresy. Tieron gives us a glimpse into the politics of the Throneworld, and pulls back the veil on any notion that the Imperium is a unified front against the forces arrayed against humanity.

If you’ve been reading my Black Library reviews for a while, you may be familiar with what it is I like most about their recent offerings: examination of what the Imperium actually is, and the ways in which this future is not aspirational. In The Emperor’s Legion Wraight does an excellent job of critiquing the Imperium, those who make up its elite, and its methods.

Killing is easy. Our Imperium has stagnated in many ways and yet we have become such experts in the application of violence that to end a life has become as trivial and as commonplace as clearing a throat. I had no compunction over using my power when it was necessary, but neither did I share the zeal for destruction that so many of the Throne’s own servants exhibited.

Through Valerian’s eyes, in particular, we get a look at its brutality. He’s an interesting character, one who grapples with his role as a member of the Emperor’s Legion (probably the most powerful and deadly individuals in the Imperium) and the place of the Custodians in the universe at this time, and how they are grappling with the restriction that they may never leave the Throneworld.

Despite the fact that the Custodians and the Imperium are presented as the “good guys”, it’s worth taking into consideration this scene, in which Valerian drops among a huge protest/riot at the gates of the Palace. He’s on his own, a single Custodian against thousands of protestors (and possibly heretics):

I was surrounded on every side. For a few moments, I went unimpeded. The closest of the mortals stared at me, open-mouthed. Then the more perspicacious, recognising slowly what I was, started to shout in alarm, then to run, to fall on their faces, to stumble and panic. More turned and fled, shoving their way through the rest to get away. The vast crowd began to fold in on itself, suddenly riven by inexplicable terror at its heart. I paid them no attention. They were like a swarm of insects – huge but incapable of doing me harm. Many were not even properly armed, just carrying machine tools or improvised spears, and their screaming turned swiftly from anger to terror. Some even cried out words of desperate repentance, sobbing frantically and trying to touch my cloak, though the bulk of them merely wished to get away from me as fast as they could.

I’ve very much enjoyed many of the Black Library novels that take place mostly away from the battle lines in the endless war against Chaos and the Xenos. The Emperor’s Legion is one of these novels (although, there is still plenty of action — it is a WH40k novel, after all), and it’s also a novel that does a lot to expand readers’ understanding of the Imperium — its factionalism, its insecurities, its brutal methods, and also its fragility. We see how Guilliman’s return upsets Terran politics (a theme that continues in the Dawn of Fire series). And that aforementioned daemon attack? Wraight does a great job there, alternating the POV between Valerian and Aleya, and showing us both the wider horror and the more personal and intense combat.

Definitely recommended for all fans of the WH40k franchise. I’ll be reading the sequel, The Regent’s Shadow, very soon.

Chris Wraight’s The Emperor’s Legion is out now, published by Black Library in North America and in the UK.

Also on CR: Interview with Chris Wraight (2011); Reviews of Brotherhood of the Storm, The Path of Heaven, Argent, Valdor, and Warhawk