Skip to content
HomeUpcoming: IN THE SHADOW OF LIGHTNING by Brian McClellan (Tor Books) 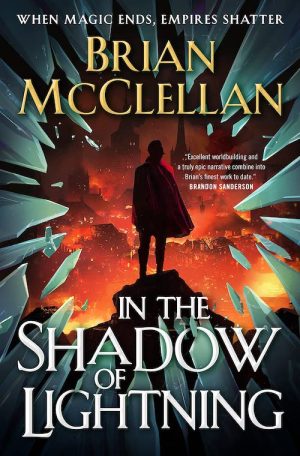 It shouldn’t be a surprise that I’m looking forward to Brian McClellan‘s next novel. I’ve been reading his stuff since his debut, Promise of Blood — the novel that launched the Powder Mage series in fine style. The Powder Mage series was followed by Gods of Blood and Powder (same world, set later). With next year’s In the Shadow of Lightning, McClellan launches a new series — Glass Immortals — set in a wholly new fantasy world. Here’s the synopsis:

A brand-new epic fantasy where magic is a finite resource — and it’s running out.

Demir Grappo is an outcast — he fled a life of wealth and power, abandoning his responsibilities as a general, a governor, and a son. Now he will live out his days as a grifter, rootless, and alone. But when his mother is brutally murdered, Demir must return from exile to claim his seat at the head of the family and uncover the truth that got her killed: the very power that keeps civilization turning, godglass, is running out.

Now, Demir must find allies, old friends and rivals alike, confront the powerful guild-families who are only interested in making the most of the scraps left at the table and uncover the invisible hand that threatens the Empire. A war is coming, a war unlike any other. And Demir and his ragtag group of outcasts are the only thing that stands in the way of the end of life as the world knows it.

In the Shadow of Lightning is due to be published by Tor Books in North America and in the UK, on June 21st, 2022.

Also on CR: Interview with Brian McClellan (2013); Guest Posts on “My Favourite Novel” and “Protagonist Ages in Epic Fantasy”; Excerpt from The Autumn Republic; Reviews of Promise of Blood, The Crimson Campaign, The Autumn Republic, and War Cry