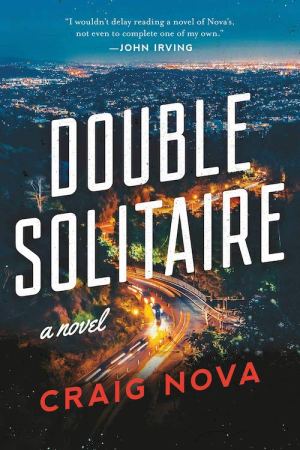 Quinn Farrell is a modern-day fixer in Los Angeles — he cleans up other people’s messes. Rich people’s messes. For a lot of money. He’s so good that he’s become indispensable to Hollywood moguls and he’s managed to construct a working moral framework so that he can live with himself. That is until a new neighbor moves next door, Rose Marie, who works with terminally ill teens. Against all his survival instincts, Farrell falls in love with Rose Marie and then her uncanny patients, who shine a spotlight into his soul.

When a client steps over the line and Farrell is hired to clean up after a reprehensible crime, his carefully constructed ethical house of cards comes crashing down.

This is Craig Nova’s first crime novel, which introduces us to Hollywood/LA fixer, Quinn Farrell. Making a living cleaning up the (self-inflicted) messes made by the rich and famous, in Double Solitaire he’s introduced to the absolute worst that Hollywood can produce. An interesting introduction to a complicated new protagonist, this is a pretty good novel.

I haven’t read any of Nova’s other novels, so I don’t know how this novel compares. His approach to the crime genre, at least, could be considered sparse: he doesn’t spend much time padding out characters, nor does he spend much time lingering in scenes, either. The novel moves quite quickly, a standard feature of any good crime novel. However, it means I don’t really feel like I got to know Quinn Farrell particularly well. His character came across as a bit uneven — he appears to have a strong sense of justice and morality; and yet when he’s working his actual job, it’s made clear that he may be just as bad as those he cleans up after. He is both indignant about and resigned to the fact that many of the people who cycle in and out of his orbit are probably bad or want to in some way use him. Hopefully there’ll be another novel, and we can dig a bit deeper into his character and backstory. As it is, this feels very much like an introduction to the character, rather than a complete first book in a series. (Which is an odd way to think about it, but there we go.)

The novel includes a fair bit of commentary on the shallowness and dark underbelly of Hollywood — as a business and as a cultural force, not to mention its highly manufactured qualities. Farrell has particular distaste for those stars whose outward appearance bears little-to-no resemblance to their true personalities.

Still, Braumberg had the California Disease, just like everyone else. Or, maybe he had the condition more than others. Maybe this explained why Braumberg was getting more generous with the money he gave Farrell to fix something, although Farrell had to admit the problems were getting worse, too. Part of the California Disease was the belief that you could buy your way out of fraud. Braumberg surely believed this. After all, in California there wasn’t much you couldn’t get with cash.

An interesting first novel in a new series, I’m looking forward to reading any follow up that comes out. It is not, however, the best one I’ve read. It’s a sub-genre that’s so well-populated, however, and there’s plenty of superb competition, so it’s perhaps not fair to think about comparisons too much. I hope we’ll get another novel, though, one that digs a bit deeper into Farrell’s character (maybe his past), and fleshes him out a bit more — maybe one that finds a way of better balancing his character’s two conflicting sides. If you’re looking for another LA-based mystery/crime series, I think Double Solitaire could do the trick. Certainly, it will tide you over until the next Connelly novel is out (November!).

Craig Nova’s Double Solitaire is out now, published by Arcade Crimewise in North America and in the UK.