Skip to content
HomeExcerpt: THE SILENCE OF SCHEHERAZADE by Defne Suman (Head of Zeus) 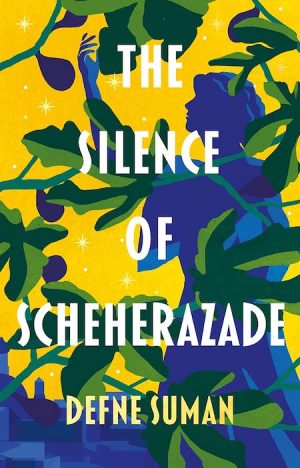 Next month, Head of Zeus are due to publish The Silence of Scheherazade by Defne Suman, a historical novel set at the beginning of the 20th century. Along with that eye-catching cover, it sounds really interesting, too. Here’s the synopsis:

At the heart of the Ottoman Empire, in the ancient city of Smyrna, a devastating moment determines the fates of four families.

On an orange-tinted evening in September 1905, Scheherazade is born to an opium-dazed mother in the ancient city of Smyrna. At the very same moment, a dashing Indian spy arrives in the harbour with a secret mission from the British Empire. He sails in to golden-hued spires and minarets, scents of fig and sycamore, and the cries of street hawkers selling their wares. When he leaves, seventeen years later, it will be to the heavy smell of kerosene and smoke as the city, and its people, are engulfed in flames.

But let us not rush, for much will happen between then and now. Birth, death, romance and grief are all to come as these peaceful, cosmopolitan streets are used as bargaining chips in the wake of the First World War.

Told through the intertwining fates of a Levantine, a Greek, a Turkish and an Armenian family, this unforgettable novel reveals a city, and a culture, now lost to time.

And now, on with the excerpt!

The God of Fleeting Moments

The people who gave me the name Scheherazade found me unconscious in a garden smelling of honeysuckle just before dawn one morning. My hair was tangled in the roots of the mulberry tree under which I was lying. My legs were a mass of festering wounds from the flames that had engulfed my skirt, but it was impossible not to notice the serene smile on my face. They assumed I was watching a lovely dream behind my closed eyes. They couldn’t understand how I had got through the locked gate and into the garden.

I remember it all. This was a different September. The acacia trees were in bloom, schools were about to open. I was seventeen. My birthday week had just come to an end.  The kite stuck in the mulberry branches – it was red, like everything else that night – was fluttering in the wind blowing from the mountains to the sea. The earth beneath me was soft, moist, inviting. Angel fingers moved over my cheeks. A door slammed somewhere far away. Then I heard the ‘tak’ of a cartridge being loaded. The double-barrelled shotgun would definitely blow my brains out. Let it happen. Everybody was shooting everybody that night. The sea was clogged with bodies, every one of them bloated like balloons.

We had mingled with death too much to be afraid of it in those days.

The surprising thing was life itself. The sight of children in red and green dresses splashing around among the corpses as the ocean currents drew their little bodies downwards. The boys and girls whose hair was floating like seaweed, singing their last breath as they hung onto the chains of the European ships and begged the captains to take them aboard. How they clung to life! I did not have that much strength left in me. I was debilitated, weak, used up, finished.

My ribcage collapsed into the earth. I didn’t even open my mouth.

If I had opened it, no sound would have come out, but I did not yet know this.

Heaven was at the end of the double-barrelled shotgun. I closed my eyes.

In the distance a child was crying.

Behind my closed eyes I saw a woman. She was standing on the deck of a long, narrow ship. Two thick plaits were wound around her head and a fringe hid her frowning eyebrows. Avinash Pillai was standing directly behind her, his dark arms encircling her waist, pressing her tightly to his chest. The sea was flickering with yellowy-orange flames.  The hatless woman, leaning her head on the Indian man’s shoulder, was crying.

The woman’s name was Edith Lamarck.

She was my mother.

I did not know this at the time. Avinash Pillai told me years later.

Charles Lamarck’s youngest child was born in Bournabat, in a stone mansion with a large, sloping garden full of camellias, bougainvillea and various kinds of roses set in the middle of a vast tract of land. When she was a child, Edith believed that this garden, which on one side was bordered by a poplar forest, was paradise itself. Bournabat was surrounded by mountains which merged with the blue of the sky. Cherry trees and pomegranate trees greeted passers-by.

Little Edith used to lie among the blue, purple and pink hydrangeas that had been planted by her grandfather with his own hands – ‘These are my grandchildren,’ he would say – and watch the clouds. One of those clouds carried Kairos on its back. Kairos was the god of mortal time, time which flew away. He was in love with the Amazon queen Smyrna, who founded the city that took her name. Every day, Kairos travelled across the blue skies on the back of a cloud, greeting the queen’s great-great-grandchildren.  Smyrna was as beautiful as she was powerful, and equally just. In archery, she had no superiors. Like other Amazon women, she had cut off her right breast at puberty in order that it not interfere with the drawing of the bowstring. Edith dreamed of her as she rode her horse along the golden shores, her long black hair rippling. If she ever had a daughter, she would name her Smyrna.

Defne Suman’s The Silence of Scheherazade, translated by Betsy Göksel, is published by Head of Zeus in North America (September 19th) and in the UK (out now).