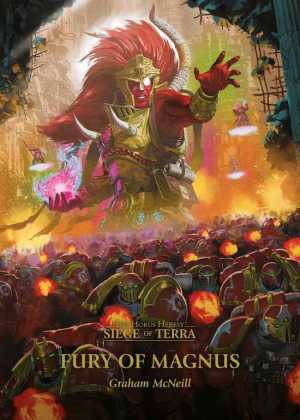 Of all the Emperor’s sons who fell to Chaos, it is perhaps Magnus the Red whose tale is the most tragic. Sanctioned because of his desire for knowledge, chastised, judged, and shattered to his very elements – there is much for the Crimson King to feel vengeful for.

Yet revenge is not the only thing that draws him to Terra alongside the Warmaster’s besieging armies. He seeks something, a fragment, the missing piece of himself that lies within the most impregnable place on the planet – the inner sanctum of the Imperial Palace. As the greatest conflict of the ages reaches fever pitch, Magnus fights his own inner battle.

To be whole once more, he must not only overcome the fiercest of defences, but also face the one being whom he loves and hates with equal fervour more than any other – his errant father, the Emperor of Mankind.

In Fury of Magnus, his second novella set during the Siege of Terra, Graham McNeill brings Magnus the Red’s story to an end, of sorts. A story the author has been telling for a few years, now (starting with the superb A Thousand Sons), this final chapter contains some surprises, some great action, and ultimately a devastating choice. Magnus remains one of the most interesting characters in the Horus Heresy, and I think McNeill has done him justice. I enjoyed this.

Fury of Magnus is not, actually, all about Magnus. I was a little surprised, during the first half or so, how little he featured in the story. McNeill (re-)introduces some fan-favourite characters from across multiple Heresy titles, and brings them together. As should now be expected from the Siege of Terra series, not everyone is going to survive. All of the characters are well-written, and readers will quickly find themselves invested in their fates — those on the loyalist and traitor sides of the war.

But, I think most readers will be most interested in the fate of Magnus the Red, Primarch of the Thousand Sons and master of the sorcerous arts. Betrayed by the Emperor and (unbeknownst to Magnus) Horus, his part in the Heresy has been largely not of his making. He did not follow Horus through some ideological fealty, nor did he give himself over fully to Chaos for some time. McNeill does a great job showing Magnus’s surprising lack of agency — in all of his Magnus stories, but more explicitly in this novella. It’s ironic, given that he has a nearly-unsurpassed gift for foresight and divination. The story builds to a moment when the future and fate of humanity rests solely in his hands, in a nice reversal of his general place in the Heresy. And, finally, his decision to give himself fully to the Chaos powers and also to Horus’s insurrection. (This shouldn’t be a spoiler, if you’re even vaguely familiar with the WH40k mythology/story.)

There are a few surprises in this novella, which left me questioning what I already knew/had learned about the events of the Siege. McNeill does a great job of sowing doubt in the reader, and also adding to the story some great moments that haven’t (to my knowledge) ever been covered or hinted at before. There’s some explosive action, some unexpected moments of tenderness and compassion, and, of course, tragedy.

If you’ve been following Magnus’s story over the course of the Horus Heresy, then this really is a must read.

Graham McNeill’s Fury of Magnus is out now, published by Black Library in North America and in the UK.