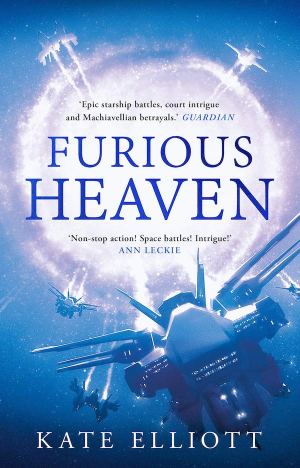 In 2021, Ad Astra are due to publish Furious Heaven, the sequel to Kate Elliott’s acclaimed Unconquerable Sun. A space opera trilogy inspired by the life of Alexander The Great, it has plenty of “non-stop action, space battles and intrigue”. While I still have to get caught up on the first novel, I’m really looking forward to reading them both. Here’s the synopsis for the second novel:

The Republic of Chaonia fleets under the joint command of Princess Sun and her formidable mother, Queen-Marshal Eirene, have defeated and driven out an invading fleet of the Phene Empire, although not without heavy losses. But the Empire remains strong and undeterred. While Chaonia scrambles to rebuild its military, the Empire’s rulers are determined to squash Chaonia once and for all by any means necessary.

On the eve of Eirene’s bold attack on the rich and populous Karnos System, an unexpected tragedy strikes the republic. Sun must take charge or lose the throne. Will Sun be content with the pragmatic path laid out by her mother for Chaonia’s future? Or will she forge her own legend despite all the forces arrayed against her?

Kate Elliott’s Furious Heaven is due to be published by Ad Astra in the UK (September 1st). The first novel was published in North America by Tor Books, so I guess the second novel will be as well (no details at time of writing, though).