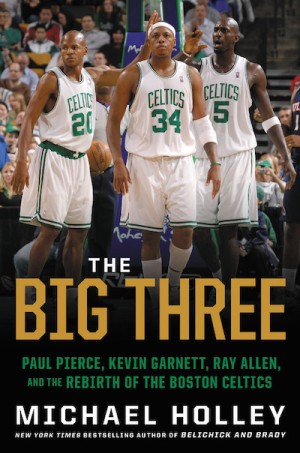 The first of “The Big Three” was Paul Pierce. As Boston Celtics fans watched the team retire Pierce’s jersey in a ceremony on February 11, 2018, they remembered again the incredible performances Pierce put on in the city for fifteen years, helping the Celtics escape the bottom of their conference to become champions and perennial championship contenders. But Pierce’s time in the city wasn’t always so smooth. In 2000, he was stabbed in a downtown nightclub eleven times in a seemingly random attack. Six years later, remaining the sole star on a struggling team, he asked to be traded and briefly became a lightning rod among fans.

Then, in 2007, the Boston Celtics General Manager made two monumental trades, bringing Ray Allen and Kevin Garnett to Boston. A press conference on July 31, 2007 was a sight to behold: Pierce, KG, and Ray Allen holding up Celtics jerseys for the flood of media. Coach Doc Rivers made sure the team bonded over the thought of winning a title and living by a Bantu term called Ubuntu, which translates as “I am because we are.” Rivers wanted to make it clear that togetherness and brotherhood would help them maximize their talent and win. What came next — the synthesis of the Celtics’ “Big Three” and their dominant championship run — cemented their standing as one of great teams in NBA history, a rival to Kobe Bryant’s Lakers and LeBron James’s Cavaliers.

The story of the 2007-9 Celtics has popped up in a couple of NBA books that I’ve read recently, and thought I wanted to learn some more — more than I could learn from the internet, certainly. I saw that this book was on the way, and was lucky to receive a review copy. It’s a well-written and balanced story, told with authority and also affection — for the team, the players, and the sport. I really enjoyed this.

The Big Three focuses on, unsurprisingly, the three players who formed the core of the champion Boston Celtics in 2008. It was the first year the team had won it all since 1986. They were, in fact, Boston’s second Big Three, after Larry Bird, Kevin McHale and Robert Parish, who spearheaded the Celtics’ 1980s title runs.

After years of languishing in the middle, or bottom half of the NBA league, a change had to be made. So, under the leadership of Danny Ainge, and coaching from Doc Rivers, the team decided to rebuild. Paul Pierce was already in Boston (drafted in 1998), but despite putting up great stats and playing with flair, imagination, and grit, the team just never seemed to get anywhere. They needed to surround him with top-calibre players. Over in Minnesota, Garnett was experiencing something similar at the team where he was drafted (1995): playing incredible basketball, but never really getting anywhere. He loved his time there, it seems, but ultimately was traded to the Celtics. Ray Allen, the final piece of the puzzle, arrived in 2007, in what turned out to be a momentous year.

Holley takes readers through all the various negotiations and moves that were needed in order to engineer this team. He provides quick bios of all the relevant players, expertly woven into the narrative. The author gives us a great sense of what these people are like to be around and to work with. He also does a great job of explaining the Celtics — as someone who is still relatively new, when it comes to the subject of the NBA (not basketball, I’ve been playing it for decades, I just never had access to NBA games on the TV until I moved to Toronto), the author provides plenty of detail, history and colour to convey the culture of the organization.

In terms of the players, readers will get a good sense of their competitive drive, as well as how well they gelled as teammates and ultimately friends. We see how trades effected the team’s dynamics, brought in new blood to support the stars (all of whom were in their 30s). The book also covers the years after the championship, as the team fractured — members traded or signed elsewhere (with the hated Heat, too), growing tension between coaches and players, and so forth. Holley ends the book almost in the present.

The Big Three offers more evidence to support the claim that, for many players, it’s not really about the money: it’s about winning. This has come across in all of the books (and articles) I’ve read about winning teams and players. Sure, when your financial needs are more than met (they’re all very well-paid, after all), it’s easier to focus on getting to the championship and beating all who stand in your way. But, it’s this drive that is necessary for a team to win — it’s not enough to be the best player. A team has to gel, to bond, and to collectively want to dominate. Holley explains how the team bonded on a trip to Rome, and how the three superstars were willing to make certain sacrifices (personal stats, in particular) in order to lift the entire team and win it all.

It’s always interesting to see what an author focuses on. For the main, Holley focuses on the human story, and this book is thankfully devoid of the stat-dumps that have characterized some of the basketball books I’ve read. There are some noteworthy games that are given more space, as can be expected, but Holley does a great job of teasing out the key moments and plays that a series hinged on. Sometimes, the narrative jumped a little bit, but this was a minor issue. He doesn’t overanalyze, and allows those involved in the games and organization do most of the talking, but it’s all brought together in an excellent, engaging read.

Expertly covering the highs and lows of the Celtics, the Big Three, and their championship run in the late-2000s, this was a very enjoyable read. Any fan of the Celtics will likely want to pick this up, but I’d also recommend it to anyone interested in learning a bit more about the League’s history, and three of Hall of Famers.

Michael Holley’s The Big Three is due to be published by Hachette Books in North America and in the UK, on December 1st, 2020.

For those interested in even more reading, Kevin Garnett’s memoir, KG: A to Z, is due to be published by Simon & Schuster in February 2021, in North America and in the UK.