Skip to content
HomeUpcoming: IN THE QUICK by Kate Hope Day (Random House) 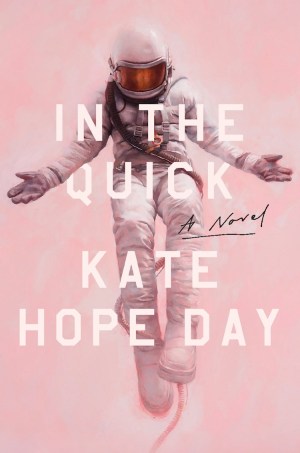 Pitched as a novel ‘in the tradition of Station Eleven and The Martian‘ (both novels I really enjoyed), Kate Hope Day‘s upcoming novel In the Quick caught my attention. Not only does it have a striking cover (not sure I’ve seen many astronauts with a pink background), but the synopsis also makes it sound really interesting:

A young, ambitious female astronaut’s life is upended by a fiery love affair that threatens the rescue of a lost crew…

June is a brilliant but difficult girl with a gift for mechanical invention, who leaves home to begin a grueling astronaut training program. Six years later, she has gained a coveted post as an engineer on a space station, but is haunted by the mystery of Inquiry, a revolutionary spacecraft powered by her beloved late uncle’s fuel cells. The spacecraft went missing when June was twelve years old, and while the rest of the world has forgotten them, June alone has evidence that makes her believe the crew is still alive.

She seeks out James, her uncle’s former protégée, also brilliant, also difficult, who has been trying to discover why Inquiry’s fuel cells failed. James and June forge an intense intellectual bond that becomes an electric attraction. But the love that develops between them as they work to solve the fuel cell’s fatal flaw threatens to destroy everything they’ve worked so hard to create — and any chance of bringing the Inquiry crew home alive.

Equal parts gripping narrative of scientific discovery and charged love story, In the Quick is an exploration of the strengths and limits of human ability in the face of hardship and the costs of human ingenuity. At its beating heart are June and James, whose love for each other is eclipsed only by their drive to conquer the challenges of space travel.

In the Quick is due to be published by Random House in North America, on March 2nd, 2021. (At the time of writing, I couldn’t find any UK-specific release information.) In the meantime, if you’re interested in reading more by the author, check out her debut, If, Then.