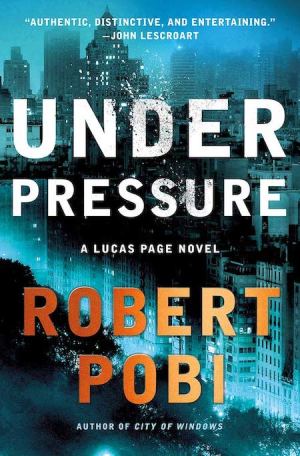 A series of deadly explosions rock the city of New York and with too many victims and no known motive, the F.B.I. turns once again to Dr. Lucas Page…

On a beautiful October evening, New York City’s iconic Guggenheim Museum is closed for a tech company’s private gala. Until an explosion rocks the night, instantly killing 702 people, including every single attendee — yet the damage to the building itself was minimal.

An explosion of that precision was no accident and, in response, the FBI mobilizes its entire team — but the sheer number of victims strains their resources. Were all 702 victims in the wrong place at the wrong time, or was there only one target and 701 unlucky bystanders? That many victim files is a staggering amount of data to sort through and Brett Kehoe, Special Agent in Charge of Manhattan, decides that he can’t do this without more computational power.

Dr. Lucas Page, astrophysicist, university professor, and former FBI agent, is uniquely gifted for the task at hand — he can visualize a crime scene as if he was a bystander and can break down any set of data at a glance. Even though Page wants nothing to do with the FBI, with his city under attack and his family at risk, he steps in to find a killer in a haystack before they strike again.

I really enjoyed the first novel in Robert Pobi’s Lucas Page series, City of Windows. I was therefore very much looking forward to the character’s second outing, and I’m happy to report that I was not disappointed. I really enjoyed this, and zipped through it.

Lucas Page is an excellent protagonist. The victim of a bombing years ago, he has been reconstructed with multiple prosthetics. He has left the FBI and turned his prodigious intellect to teaching — a profession he finds rewarding, but also a little bit boring. He was roped into an FBI investigation in City of Windows, helping hunt down a sniper in New York City. In Under Pressure, a massive and sophisticated explosive device is detonated at a swanky art exhibit. Hundreds of New York’s wealthiest are vaporized in seconds. Page is called in to consult — a surprisingly callous request, given his own history and trauma. He accepts, however, due to his sense of justice and attraction to a new puzzle to solve. As events spiral beyond the one explosion, Page and the FBI must scramble to prevent more bombings. Evidence mounts that this is the work of a highly intelligent mastermind with access to plenty of resources — and also one who has been planning this for quite some time.

Page’s cavalier approach to self-preservation gets results, but also creates considerable tension in his family and with his by-the-book FBI colleagues. It makes for a gripping read, but also keeps him grounded and adds an extra layer to his character. His fierce desire to see justice served (and crush ignorance) is at war with his deep love for his family and desire to keep them safe and happy.

“It is the twenty-first century and we still have to deal with flat-earthers and anti-vaxxers and moon landing truthers. This is what you get when guns are more important than books—a nation of sociocultural primitives.”

As in the previous novel in the series, Under Pressure has a lot of social and political commentary. Everything from America’s weakness for conspiracy theories, to police brutality, to the deleterious impact the internet has had on society is covered, and covered well: Pobi wields his sharp pen effectively, but never devolves into tirades that do not serve the story. The author is clearly quite critical of certain aspects of American society and culture, which he channels mainly through Page (and the story’s antagonist, but going into that in any detail will spoil things).

Page has a Dr. Gregory House-like confidence in his own abilities and is quite secure in the knowledge that he is almost always the most intelligent person in any room he enters. He is quite abrasive as a result, easily rubs people the wrong way, and has difficult making connections with colleagues. This does make his interactions with others often amusing to read about, of course.

“You must find this job very tedious, Dr. Page.”

“No. Just the people I deal with.”

He’s not infallible, however, and it’s equally interesting to see him fix his mistakes and errors in calculation or observation. His working relationship with Whitaker is great, and I’m very happy that she returned. She is one of the few people Page can stand, and she manages to (mostly) keep him in line and alive.

Page’s colleagues are more positive in their impressions of their countrymen — despite being in law enforcement and frequently coming into contact with the worst that America has to offer. Their presence in the story stops the novel becoming too critical, but also offers great room for discussion and examination.

Overall, then, Under Pressure is another excellent novel in this new series. Page is a great protagonist, and Whitaker and Kehoe are excellent support for him. I’m really looking forward to more novels in this series and by this author.

Robert Pobi’s Under Pressure is due to be published by Minotaur Books in North America (August 4th) and Mulholland Books in the UK (August 6th).

Also on CR: Review of City of Windows