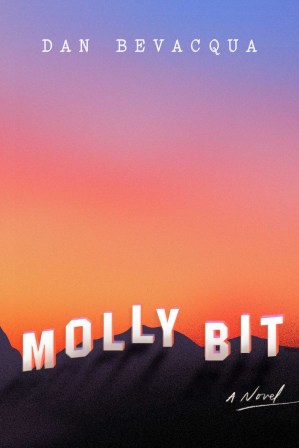 A tragic death was not part of the script.

This certainly helps her get through the countless auditions featuring actors who look and dress just like she does; helps her swallow the indignity of less talented actors landing roles; even helps her endure the industry’s aggressive over-sexualizing of young women.

When Molly is offered a lead role in a major film, she knows, too, that to seize this opportunity she must sacrifice everything. Even her commitment to an old friend.

It’s her big break, and Molly becomes a star. But she soon learns the hardest part of fame is everything after.

Molly Bit begins as a portrait of the artist as a young woman and transforms into an ode to the strange, personal magic of moviemaking, and our obsession — public and private — with performance. In Molly Bit, Dan Bevacqua announces himself as a force of wit and insight with his profound reflections on celebrity, beauty, violence, and the power of art.

I was initially intrigued by this novel for two reasons: its connection to Hollywood, and also the pitch stated that it was akin to Daisy Jones and the Six, one of my favourite novels from 2019. Having read the novel, I’m not sure that connection is as strong as they might hope, but I understand why they chose it. Molly Bit is an interesting novel with a lot to say about Hollywood, celebrity, and an individual’s legacy.

As I’m sure I’ve mentioned many times on CR, I am fascinated by Los Angeles, Hollywood and the film industry. Therefore, it should be unsurprising that I dove into this novel with high hopes. It follows the life and career of Molly Bit — from her student film days, to Hollywood star, to tragic demise.

One thing that comes across very quickly is that Bevacqua is a very good writer — this novel is filled with a great many amusing, interesting, and sharp observations and descriptions. At each stage of Molly Bit’s life, the chapters are peppered with great snippets and critiques of those who enter Molly’s orbit — from the students at college (very amusing), to the creatures of Los Angeles and Hollywood in particular.

“One way or another, and because she was a writer, Abigail was always talking about herself.”

Molly becomes adept at using her beauty and success to get what she wants — at times, she comes across as calculating and maybe just a little bit sociopathic. At the same time, she’s aware of how the Hollywood system is using her in return. It’s tiring, but provides the wealth and success that she needs. Everyone she meets and works with is a well-rounded character — some of them are maybe a bit obvious, or familiar, but Bevacqua does a very good job of keeping them interesting and believable. For example, her first and long-time partner is a drug addict, whose appetites eventual overtake her successes. Her frequent producer is a complete asshole (he’s so awful at times), but he’s also wracked by grief.

“In Hollywood, nobody likes anybody else, and everyone is at least faintly awful.”

“These people are deranged. All they do are horrible things to one another.”

The first half of the novel was brilliant: we see Molly grow into the role she is destined to play — from poor student to star, we see her navigating the various systems in which she finds herself. Aware of her beauty, she knows how to work other people to get what she wants, while simultaneously having to fend off the unwanted attention. She navigates the pitfalls of celebrity — the invasions of privacy, the oppressive coverage, the delicate nature of press interviews and readers’/viewers’ reactions.

As I’ve mentioned, it’s a sharply observed novel. However, the second half didn’t feel as focused as the first. It started to feel a bit more disconnected. The story lurched forward in time, which I hadn’t been expecting. I found Molly’s perspective to be the most interesting (and honest). Some of the POVs that appeared later in the novel weren’t as engaging, nor did they have the same impact. The quality of Bevacqua’s writing kept me reading until the end, but I nevertheless finished feeling a little bit dissatisfied.

Nevertheless, there’s plenty to like about this debut novel, and I’ll certainly be interested in reading anything else the author publishes.

Dan Bevaqua’s Molly Bit is due to be published by Simon & Schuster on February 4th, 2020.