Skip to content
HomeQuick Review: THE WRONG SIDE OF GOODBYE and TWO KINDS OF TRUTH by Michael Connelly (Orion/Grand Central) 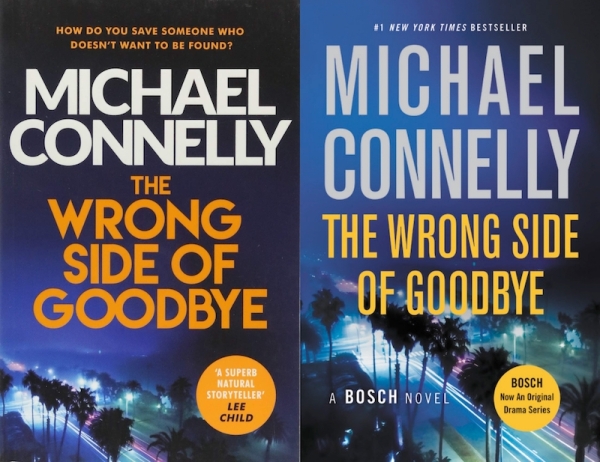 Bosch enters a new phase of his law enforcement career

As you may have noticed, I’ve been working my way through the Bosch universe novels at a fair clip this year. Now that I’ve caught up with recent novels, I thought I’d write some more reviews. These two novels were published 2016 and 2018 — they were separated by The Late Show, which introduced Renee Ballard (and was also the first of Connelly’s books that I read). Both of these were excellent novels, and Connelly remains one of the best writers working today.

The Wrong Side of Goodbye is a new beginning for Harry Bosch. He’s got his PI licence renewed, and he’s been hired by a reclusive billionaire to track down a possible heir. Here’s the synopsis:

California’s newest private investigator, Detective Harry Bosch, must track down a missing heir while helping a police department connect the dots on a dangerous cold case.

Harry Bosch is California’s newest private investigator. He doesn’t advertise, he doesn’t have an office, and he’s picky about who he works for, but it doesn’t matter. His chops from thirty years with the LAPD speak for themselves.

Soon one of Southern California’s biggest moguls comes calling. The reclusive billionaire is nearing the end of his life and is haunted by one regret. When he was young, he had a relationship with a Mexican girl, his great love. But soon after becoming pregnant, she disappeared. Did she have the baby? And if so, what happened to it?

Desperate to know whether he has an heir, the dying magnate hires Bosch, the only person he can trust. With such a vast fortune at stake, Harry realizes that his mission could be risky not only for himself but for the one he’s seeking. But as he begins to uncover the haunting story — and finds uncanny links to his own past — he knows he cannot rest until he finds the truth.

At the same time, unable to leave cop work behind completely, he volunteers as an investigator for a tiny cash-strapped police department and finds himself tracking a serial rapist who is one of the most baffling and dangerous foes he has ever faced.

This novel was an interesting changing from previous novels. Without the benefits of the LAPD behind him, he needs to temper some of his investigative instincts in order to not run afoul of a variety of other police departments, as he tries to hunt down a possible living heir to a tremendous fortune.

It’s one of the classic storylines of crime fiction: a wealthy tycoon is dying, believes he has an heir, and asks our hero to find them. Bosch isn’t especially familiar with this stratum of society, but he is nothing if not tenacious and inventive.

Given the tycoon’s history, and that of various others Bosch connects to him, The Wrong Side of Goodbye offers an opportunity to examine Bosch’s own past — specifically, his deployment during the Vietnam War, and how his experiences over there have affected his approach to his life’s work.

This novel has many of the hallmarks of a Connelly novel: superb, clear prose, an engaging investigation filled with interesting details and a few twists. Connelly keeps us guessing without being obvious about it, throws in a couple of solid red herrings, and builds to a satisfying conclusion.

I won’t go too much more into this novel, as I don’t want to spoil anything. Needless to say, though, I very much enjoyed it. After finishing, I moved right on to Two Kinds of Truth…

In Two Kinds of Truth, Bosch finds himself embroiled in a pair of cases: one connected to the opioid epidemic that has swept the United States, and another that brings into question his own past conduct on a homicide case.

Exiled from the LAPD, Harry Bosch must clear his name, uncover a ring of prescription drug abuse, and outwit a clever killer before it’s too late.

Harry Bosch, exiled from the LAPD, is working cold cases for the San Fernando Police Department when all hands are called out to a local drugstore, where two pharmacists have been murdered in a robbery. Bosch and the tiny town’s three-person detective squad sift through the clues, which lead into the dangerous, big-business world of prescription drug abuse. To get to the people at the top, Bosch must risk everything and go undercover in the shadowy world of organized pill mills.

Meanwhile, an old case from Bosch’s days with the LAPD comes back to haunt him when a long-imprisoned killer claims Harry framed him and seems to have new evidence to prove it. Bosch left the LAPD on bad terms, so his former colleagues are not keen on protecting his reputation. But if this conviction is overturned, every case Bosch ever worked will be called into question. As usual, he must fend for himself as he tries to clear his name and keep a clever killer in prison.

The two cases wind around each other like strands of barbed wire. Along the way, Bosch discovers that there are two kinds of truth: the kind that sets you free and the kind that leaves you buried in darkness.

Working as a volunteer for the San Fernando PD, in this novel Harry Bosch becomes embroiled in a difficult, dangerous case related to a double-homicide at a pharmacy. It quickly becomes apparent that the killings may have been related to the illegal opiates trade, a scourge that is laying waste to a growing number of Los Angelenos and Americans as a whole.

Connelly has always had his finger on the pulse and current affairs, and many of his novels have discussed or touched upon urgent issues facing America and/or California. In the past, he has covered the rise of militarized police forces, terrorism and the post-9/11 law enforcement. I thought his handling of the ongoing opiates crisis in America was very good. Through Bosch’s investigation, he covers the ways in which people fall into addiction and the dangers that too often come with it. He also highlights how devious and frankly evil are the dealers and pushers, those at the top of the illegal pyramid who manipulate the system and addicts to help them acquire stunning amounts of cash from the illegal trade in opiates.

Bosch is sympathetic towards the addicts (even those who are hostile towards him), and one connection he makes in this novel will continue into the next, Dark Sacred Night (which I’ll review soon). It’s nice to be reminded that, despite his often line-crossing approach to his job, he still keeps his mantra paramount: “everyone counts, or nobody counts.”

At the same time as he’s dealing with the undercover investigation, he is also facing a potentially disastrous investigation by the DA and LAPD — as the synopsis states, a past case has come back to bite him, as the convicted killer accuses Bosch of planting evidence. What follows is a twisty investigation that draws in his last partner at the LAPD (Soto) and also his half-brother, Mickey Haller (who also appeared in The Wrong Side of Goodbye). It is in this part of the story that the title of the novel is addressed:

“He knew there were two kinds of truth in this world. The truth that was the unalterable bedrock of one’s life and mission. And the other, malleable truth of politicians, charlatans, corrupt lawyers, and their clients, bent and molded to serve whatever purpose was at hand.”

As with other novels, Connelly does a fantastic job of balancing the novel’s multiple cases/story threads. Actions on one can impact the other in myriad ways — either illuminating problems or solutions, or distracting Bosch from handling a potential threat.

His characters remain realistic throughout, and it’s always nice when familiar faces return after long absences (in this case, his old partner Edgar). Bosch’s relationship with his daughter, Maddie, continues to grow and I really like the way Connelly has woven this into the series: they are all each of them has, following the death of Maddie’s mother back in Nine Dragons. They are very close, but Bosch is also kind of inept at reading his daughter, and sometimes he fails in amusing and realistic ways to properly prepare her for what he faces in the line of duty.

I zipped through both of these novels very quickly. As with all of Connelly’s novels that I’ve read so far, I finished them ready to read the next. Connelly really has become one of my favourite authors. Each of his books is a must-read for anyone who enjoys crime fiction, certainly, but I would also just recommend them to everyone who enjoys reading. Each has been fantastic.

Michael Connelly’s Bosch novels are published in the UK by Orion, and in North America by Little, Brown/Grand Central.