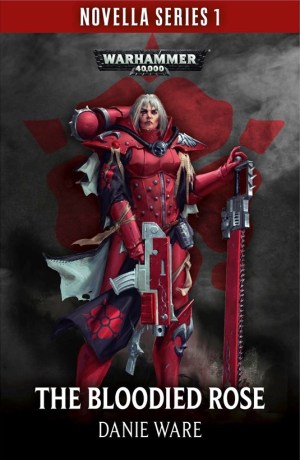 THE BLOODIED ROSE by Danie Ware

From the blasphemy of the fallen… Our Emperor, deliver us. At the edge of the Imperium sits the fetid jungle world of Lautis. Amidst the creeping foliage and ancient monuments, a horror is rising. From the depths of a crumbling cathedral come bloodied nightmares, intent on fulfilling their dark purpose by any means necessary. Only one thing stands in their way: the wrathful, holy fire of the Adepta Sororitas. Filled with the light of the Emperor, Sister Superior Augusta and her squad are a force to be reckoned with. They are here to purge the darkness from Lautis with prayer and bolter, and nothing will stop them. But the things that dwell in the darkness aren’t afraid. Augusta must put her trust in her Battle Sisters and lead them into the shadows of the crypts in search of the truth. Faith and fire are powerful weapons, but will they be enough to defeat the sinister powers that lurk in the deeps?

I’ve enjoyed all of Danie Ware’s Black Library fiction to date, and I’m very happy to report that The Bloodied Rose is another fantastic story. It draws on a fair few horror components to make for a sinister, grim WH40k story. The novella plays with some classic WH40k fiction tropes and styles, but updates it to incorporate some grittier elements. I really enjoyed this.

I certainly hope Ware is planning to write more Sisters of Battle stories (and others in general). Great stuff. Recommended for all fans of WH40k, and a must-read for fans of the Adeptus Sororitas. 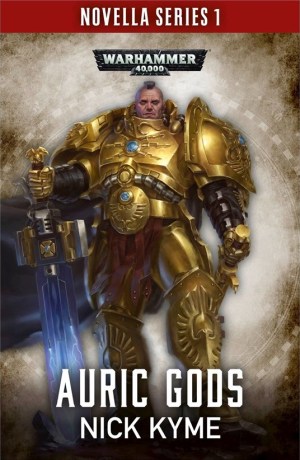 For millennia the Adeptus Custodes have stayed true to their sworn duty – defend holy Terra and the God-Emperor to their very last breath. But when the Great Rift tears the Imperium apart, loosing tides of daemons upon mankind, they are faced with a dilemma. Should they continue to guard the Palace and the Golden Throne, or take to the stars to proactively root out the Ultimate Enemy? When Shield-Captain Cartovandis receives a mysterious distress call from the planet Vorganthian, he gathers a band of Custodians to investigate. When they arrive, they find a world in the grip of self-annihilation, overrun by Chaos cultists. In a race against time, the Custodians must find out what has happened, and hunt down those responsible, before the madness has a chance to reach its true target – something much closer to their hearts.

Tense moments, claustrophobic and intense action, and some suitably crazy Chaos shenanigans and beasties — this was a very interesting WH40k story. The story plays around with what we know about members of the Adeptus Custodes, and also what it means to leave an organization like this. (In fact, I had no idea that was even possible, before reading this.) I enjoyed seeing the Custodes differently — rather than the single-minded, utterly sure guardians of the Throne, in this story there is some uncertainty. One of the characters is not so polished. There are cracks in that golden armour, if you will.

If you’re a fan of the Custodians, and have been wondering how they operate post-Horus Heresy, then this novella is definitely recommended (as is Chris Wraight’s The Emperor’s Legion, which is climbing my TBR mountain).

Both The Bloodied Rose and Auric Gods are out now, published by Black Library. The paperback editions have now been discontinued, but they are available individually as eBooks. Both stories will appear in the forthcoming collection, Servants of the Imperium.