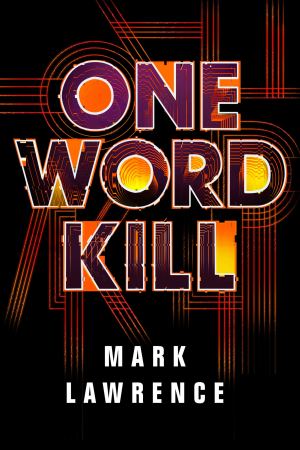 The first in the Impossible Times series

In January 1986, fifteen-year-old boy-genius Nick Hayes discovers he’s dying. And it isn’t even the strangest thing to happen to him that week.

Nick and his Dungeons & Dragons-playing friends are used to living in their imaginations. But when a new girl, Mia, joins the group and reality becomes weirder than the fantasy world they visit in their weekly games, none of them are prepared for what comes next. A strange — yet curiously familiar — man is following Nick, with abilities that just shouldn’t exist. And this man bears a cryptic message: Mia’s in grave danger, though she doesn’t know it yet. She needs Nick’s help — now.

He finds himself in a race against time to unravel an impossible mystery and save the girl. And all that stands in his way is a probably terminal disease, a knife-wielding maniac and the laws of physics.

Mark Lawrence is best known for his three excellent grimdark fantasy series — The Broken Empire, The Red Queen’s War, and Book of the Ancestor. I’ve been a fan of his work since Prince of Thorns, which I was able to get as a review copy. One of the first things that struck me was how good a writer Lawrence is — something that is immediately apparent in everything he writes. In One Word Kill, the author shows that he’s just as adept writing in the real world as he is in his dystopian and fantasy settings. This was a lot of fun.

I won’t spend too long discussing the plot — given the timey-whimey (or, time travel, if you’re more eloquent) aspects, the novel is peppered with well-timed revelations. The story moves pretty fast, although it is not action-packed. There is some good, realistic action though and the stakes increase for our protagonist and his friends as they find themselves more deeply involved in this strange mission they are handed.

As the first of a trilogy, One Word Kill does a great job of introducing us to Nick and his group of friends (who I hope we meet again in later instalments). They feel familiar, realistic and many readers may well see themselves and/or friends in these characters. They are something of social outcasts, although this isn’t dwelled upon in the story. They gather for frequent Dungeons & Dragons games (something I have, surprisingly, still never played) and bond over their love of story and the fantastical. They are all dealing with their own struggles, hang-ups and, in the case of Nick, ailments. Lawrence does a great job of showing how the gaming, social side of their friendship is so valuable to them, and the incredible value it provides.

“… that’s what united the four weirdos who were about to settle around Simon’s gaming table and play out stories of magic and monsters. That’s the common thread running through all the diverse hordes of nerds and geeks who turned up to the conventions and gatherings, who queued outside Games Workshop for the latest rulebook. We were all of us consumed by our own imagination, victims of it, haunted by impossibles, set alight by our own visions, and by other people’s. We weren’t the flamboyant artsy creatives, the darlings who would walk the boards beneath the hot eye of the spotlight, or dance, or paint, or even write novels. We were a tribe who had always felt as if we were locked into a box that we couldn’t see. And when D&D came along, suddenly we saw both the box and the key.”

Lawrence does such a good job of writing these friends. Their banter is excellent, feels natural. The quips are funny, but don’t overwhelm the story. The fact that it is set in the ’80s means the author (and his characters) can take a look at how they act and certain social mores that have become passé or unacceptable. It also allows for some amusing nostalgia, which will resonate especially with any teenager who lived in the UK in the 1980s (and, in my case, the 1990s). Here’s one example:

“The place for a teenager to buy beer was the supermarket. But you had to pad your basket out sufficiently to prove you were there on parents’ orders. For best results, take a shopping list on which the beers are written, and sandwich them between a bag of frozen peas and some fish fingers. The true artist invests in some female sanitary products, too.”

Some of the publicity material describes this as “Ready Player One meets Stranger Things“, which is maybe apt? I think in feel it certainly fits that description, but I would say it’s far more Stranger Things than it is Ready Player One, but even then that’s a bit of a stretch — yes, it’s set in the 1980s, and there’s a time travel element, but that’s pretty much it (no monsters). This is very much its own thing, and clearly stands apart. If you like the others, though, I’m sure you’ll like this as well.

Entertaining, excellently written, and frequently moving and endearing. I enjoyed this quite a bit, and am really looking forward to reading the next two books in the series: Limited Wish (out now) and Dispel Illusion (December 12th, 2019).

One Word Kill is out now, published by 47 North, and distributed in Canada by Thomas Allen & Son.

Also on CR: Interview with Mark Lawrence (2011); Reviews of Prince of Thorns, King of Thorns, and Prince of Fools

One thought on “Quick Review: ONE WORD KILL by Mark Lawrence (47 North)”